Sorry for the delay, but things have been CRAZY the past week.  So, let me get back to Wyoming.  It was our second to last full day in Wyoming and our last day with a fishing license.  Some neighbors had mentioned a few places we should check out, so we scoured the map looking at distances, slopes, terrain, and of course fishing locales.  We finally settled on an excursion to Seven Brothers Lakes.  Seven Brothers was located in a wilderness area and looked to be a nice day hike.  So, after a relaxing dinner and some rest, we were on our way. 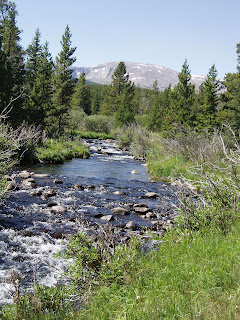 A view in the wilderness area
As you can imagine, the roads to wilderness areas can often be a little crazy.  I have been to some places with paved road right up until the end and other places where a 4x4 was a must.  This road was the latter.  We climbed over small boulders as the truck shook like an overloaded washing machine.  As we reached Solider Park, a few miles from where we wanted to start, the road divided.  Of course, the roads were poorly marked, but somehow (probably because Betty is a former orienteering national champ) we made it down the right one.  We threw dust to the wind as we rolled across the plains, with glimpses of streams and snow capped peaks in either direction.  Finally we came to the trailhead - aka where the truck could go no further without needing new shocks, a re-alignment, and a host of other things.  Mary May and I packed up our lunches, some water, and the fly fishing gear and were on our way.  Mind you, we were carrying the supplies in my over the shoulder computer bag rather than a backpack, which we didn't have.

As I mentioned, the road sucked.  And it sucked for hiking too.  Small boulders covered the road and made the walking tough.  Of course, we wanted to pack light for our trip (see lack of backpack), so we were in sneakers rather than hiking boots....a mistake we won't make again.  Even so, we made it through the first few miles pretty easily - spotting a gorgeous juvenile golden eagle (still massive in size) along the way.  We also encountered a mule train, who had been on the trail for over 30 days and had started in the Rockies....better them than me.  I think I would rather hike than ride a mule that far, but I digress.  Soon after the mule packers, we dropped into a meadow and found another interesting part of the hike - a stream crossing.  We were warned of said stream crossing, but we hadn't thought much of it.  The stream was about 20 feet across and only about 8-12 inches deep.  We decided to take off our shoes and wade it.  After being in the water for about 20 seconds my legs to started to shiver and my feet were numb.  I made it about 1/3 of the way before realizing I had no chance of making it without falling.  The cold was simply debilitating, especially when combined with slippery rocks.  So, we decided to retreat, put our shoes back on, and eat lunch. 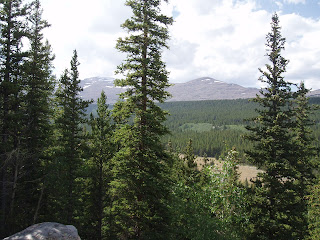 A view from 'almost' the top
After getting re-energized and psyching ourselves up, we forded the river with shoes...and made it quite easily.  Laughing at our silly thoughts of going barefoot, we meandered through the low forest before beginning our descent to 9800+ ft.  This was the part of the trail that amazed us both in hindsight.  Somehow, we blazed up the incline, making short work of what was estimated to be a 45 minute romp by the local paper.  And as we crested the mountain top we could see glimpses of sun reflecting off of water....we had made it!

We were met with a stiff, albeit cooling breeze.  It echoed across the mountain top, which was covered with boulder deposits.  We took a quick look at the near side of the lake before boulder hopping to the other side, which was a little more protected from the wind.  Mary May started with her now infamous bumble bee pattern and I with a dragon fly.  Within minutes I spotted a couple of fish and had one bolt toward my fly - only to have him turn at the last second.  Apparently, the fly just didn't look right.  So, I went to plan B - a stimulator.  I spotted some more fish, but of course, they spotted me too and could have cared less about my fly.  I am fairly sure I spotted rainbow, brown, and lake trout all in the same general area.  Finally, I saw a fish feeding about 60-70 feet from shore.  I double hauled the heck out of my line to get it to the spot in the windy conditions.  No sooner did the fly land and it was FISH ON!  My 3-4 weight rod was doubled and line running hard right.  The fish went aerial multiple times and pulled some drag.  He wasn't my biggest fish ever, but he was one of the prettiest rainbow trout I have ever seen - 14" of pure beauty done no justice by our pictures.  A big thanks to Mary May, who had run over to see the fish only to have to run back to get the camera from our bag and come back again to get a few pictures.  We released the fish and started plan C.  Plan C was to use nymphs tied about 3 feet below our dry flies, since the fish weren't feeding very actively on top. 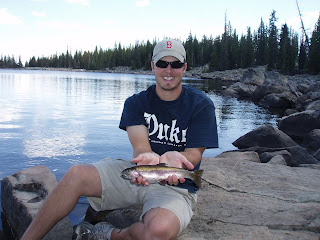 A gorgeous Seven Brothers rainbow
As we made our way toward the gear I looked down the bank and saw something brown in the water.  Initially, I thought it was a juvenile moose, but quickly realized it was at the other end of the food chain.  "Holy $%#+" I exclaimed.  Mary May thought I had just seen a giant fish as I was looking, in general, toward the water - as I tend to do wherever we go.  I pointed as the bear stood up to exit the water.  He was only 60-70 yards away and only about 30 yards (if that) from our bag.  He dried off with a quick shake and bounded across the boulder field in no time flat.  We saw him disappear into the woods as we walked over to our gear.  I laughed, wondering where he had come from, how long he had been there, and what if we had been at our bag instead of a distance away.  Of course, it felt great to laugh because we had been holding our breath moments earlier - wondering if the small bear had a mother nearby (even though it wasn't really the season for mommas and cubs to be together). 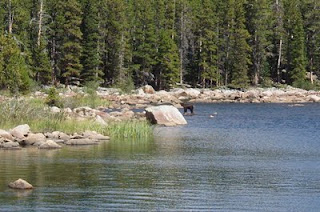 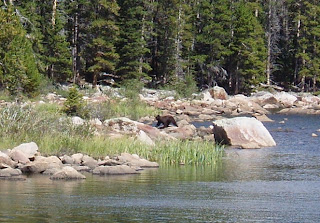 Now smiling ear to ear, I could have left happy right then and there.  But of course, I rarely turn away from a fishing opportunity and really wanted Mary May to hook-up.  So, off we went with our new dry-dropper rigs and started casting.  It didn't take too long before Mary May had a violent strike.  She did everything perfectly, but the fish managed to break the dropper line and get away.  We were pretty bummed, but she admitted to being excited to see the strike - her first on non-flowing water.

We also hiked to the second lake, but it was even bigger and windier.  We decided to give it a quick go and both managed a small strike.  However, we were getting tired and it was getting late, so we decided to head back to the first lake.  We only fished another 15 minutes, before giving in to exhaustion and getting ready to head down the mountain.  The high altitude, sun, and lack of serious sleep had made a mark over the course of our trip.  We talked about how much we enjoyed the hike, our first serious hike together, as we descended.  The only thing that could have made it better was getting to see a big bull elk or moose...our fingers were crossed! 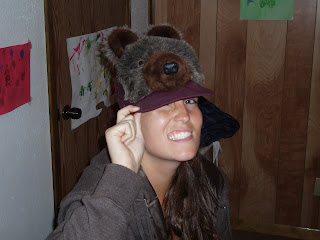 Mary May approves of this adventure!
After what seemed like twice as long as the trip up, we made it to the stream crossing, this time trudging across like it was barely even there.  We winded our way through the forest and up the hillside before coming to the final 2 miles of trail, which marked the way to the truck.  Unfortunately, our feet were killing us at this point due to the lack of hard soled shoes.  On top of that, Mary May's back was hurting and my shoulders were paying the price of taking a one shoulder bag for what was certainly a two shoulder day hike.  Finally, we saw the light penetrate the edge of the forest, giving way to the meadow where the truck parked - filled with ice cold drinks.  It was pure bliss after our 8 mile jaunt.

Betty and Martin were nearby reading and filled us in on their day.  They did some fishing in the stream, took a nap, saw a big cow moose, and just generally enjoyed the day.  We told them about our adventures as we again traversed the boulder patch road back to civilization.  As we came to the top of a small hill, we all went silent.  Ahead was a bull moose, looking lost in the middle of the road.  He slowly came toward the car, allowing for some photos and Bullwinkle jokes, before he hung a hard right into some thick coniferous brush.  Our trip to Wyoming was now complete! 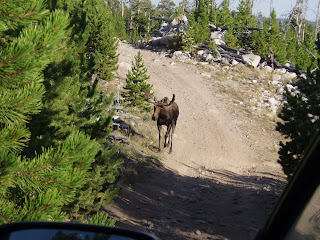 The majestic moose...not very agile
We battled sleep on the way back to the cabin where we chowed down on dinner, made a fire, and drifted to sleep to the sound of the creek.  The next day we headed to Gilette to spend a day with my sister's family.  It was great to just relax and hang out with them - particularly getting to play with my nephews. 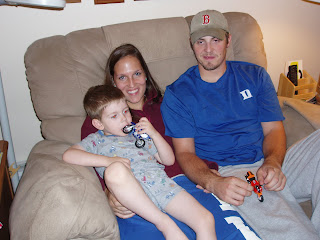 Not asleep or drunk...but it's tiring work keeping up with them
The next day I was headed back to PA then to NC.  Mary May was headed to Massachusetts for a few days before returning to NC when school started.  For me, it meant I had a day and a half to catch up on work and errands before the NC RiverBassin Rodeo.  Of course, this was all happening as hurricane Irene crept up the eastern seaboard.  So, my next blog will be about the NC RiverBassin Rodeo and our flirtations with Irene.  Until then, tight lines!
Posted by Drew Haerer at 10:19 PM