After a good night of sleep, I awoke with one thing on my mind - big bass.  Granted, that is how I wake up pretty much every day, but I knew just the spot I wanted to try for big, summertime, river bass.  I switched out some of my smallmouth gear from the rodeo for largemouth baits and off I went.

I made a fairly long paddle before getting to the area I wanted to start in.  It didn't take long before I hooked up with a few 1-2 lb largemouths.  Then I spied a gorgeous stump completely underwater while standing in the Coosa.  I threw my Deep Creek Lures Razor Beetle toward the stump and let it sink.  As I picked up, I felt the weight of a fish and set the hook.  The fish immediately went airborne then back down into the stump.  While doing so, he lodged the hook onto part of the stump and managed to come free.  It was not the way I wanted to start the day - as he was easily over 4 lbs.

I continued to another stretch where I caught two 2-3 lb bass that followed my swimbait, but didn't quite commit, by throwing a flutter worm out as a follow up bait.  I will admit, it wasn't ideal swimbait water, but I had to try it since I suspected some real giants lurked in there.  At this point I wanted to return to the stump and try it again - it just looked too good.  I threw my Razor Beetle in again and immediately felt a bite.  I set the hook and it was game on....but not 5 seconds later the fish had done the same thing as the first - wedged the hook into the stump.  I was beginning to think it wasn't my day as it was another 3+ lb bass.

A little discouraged I headed down river, landing a couple smaller bass on crankbaits.  I saw a downed tree that looked perfect, threw my bait out, and...nothing.  I reeled it in and somewhat haphazardly flipped my bait toward a nearby bush.  All of a sudden, I felt a bite and set the hook on what felt like a really good fish.  He ran for some downed wood cover and I did all I could to keep him out of it.  Finally, I was able to fight him with one hand and paddle with the other until I got out into the middle of the river.  The fish did not want to give up and was pulling furiously.  In one last ditch effort, he managed to wrap the line around a small stick that I couldn't see on the bottom of the river.  I reeled him, and the stick, to the boat and lipped him.  He was a brute and I knew it was one of my biggest river bass of the summer.

I got to the bank and got a few pictures.  Then I put him on the measuring board and scales.  The fish was extremely thick and 22" long.  He weighed in at 6 lbs on the dot.  It was exactly why you never give up when on the water.  The picture really didn't do this fish justice, but I felt bad holding him with only one hand. 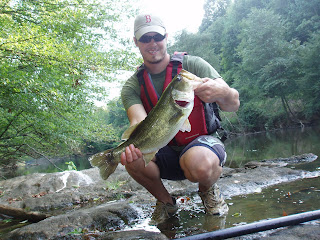 Sometimes pigs like this show up when you least expect it!
I landed one more small bass before switching to a buzzbait shortly before dark.  I landed 3 or 4 more bass fishing over downed trees with the R&S Baits Chatterbuzz rigged on one of my Carolina Custom Rods.  It was a great day for me!  But, Mary May was less enthusiastic about her day.  Her hometown and much of the northeast was getting blasted by Irene.  The rains caused flooding like never before.  Brooks became raging flows and rivers wreaked havoc on roads, bridges, and buildings.  Thankfully, she and her family remained safe and Mary May was able to make it back to NC just in time for her nursing exam...which she aced. 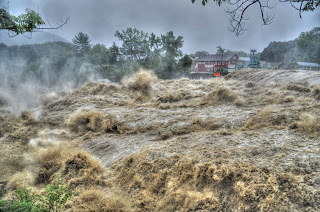 Shelbrune Falls, MA - photo courtesy of John Elder Robinson
This trip was the last local trip I have made.  However, last weekend Mary May and I met up with Bill Kohls and his girlfriend Misty near Roanoke, VA to fish the final leg of the 2011 RiverBassin Tournament Trail.  Hopefully I get that blogged soon!  Until then...tight lines!
Posted by Drew Haerer at 10:07 AM