I have been incredibly lucky to have owned a Jackson Coosa Elite kayak since December 2010. I was one of a select few invited to their factory in Tennessee to pick up our boats before they were officially released to the public. From day one I have been been throughly impressed with the Jackson operation - particularly their first ever fishing kayak, designed with the help of Drew Gregory. I have used it a ton on the rivers and lakes of central North Carolina and every trip I fall a little more in love with it. It isn't a speed demon or the lightest boat, but it is a fish catching machine. My most recent trip is a prime example of that....

Like most weekends (and weekdays come to think of it), fishing flooded my mind. Mary May agreed that we should hit the river for a couple of hours and try for a few bass and catfish. I couldn't say no, so we rounded up our gear and were off. The river was particularly busy with bank fishermen and people catching bait. We loaded the yaks and slid into the water near some fishermen (and women) who had about a 5-6 lb channel cat on their stringer.

Now, when I say "load the yaks" I am not kidding around. I pack heavy! Yesterday I carried 5 rods, 5 tackle boxes, a camera pole, a backpack loaded with soft plastics, and numerous other items to make fishing a little more easy & enjoyable. It all easily fits in the Coosa and still gives me plenty of room to stand, move around, and fish.

We crept up the river and landed a fish not too long into the day, but the high pressure system had the fish a little on the lazy side. Finally we got to an area where I thought there would be some good fish. I set-up to let Mary May fish the area I thought would be holding them and cast to a shallow flat. Suddenly, and unexpectedly, my line shot sideways and I felt the head shake of a good fish. As he left the water, I could see his impressive head and shoulders and my blood was pumping. I was trying, frantically, to not let him cruise through the prime area that Mary May was fishing as he spun my kayak. I stood with a paddle in one hand, rod in the other, trying to force the fish toward the bank. Finally I got him where I wanted him and was able to land the brute. The river bass was in the high 4 lb to low 5 lb class and 20+ gorgeous inches. 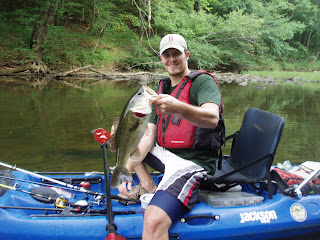 For the next 40 minutes I stood and sight fished. I stand and fish regularly from the Coosa and love it. On this trip, I was able to see underwater structure, deep areas, and tons of fish - including a giant bass in the 7 lb class. I couldn't get the big gal to eat, but I did land a few more solid fish. Mary May caught her first fish sight fishing as well.

We bass fished a while longer with only a couple more to show. Eventually, we switched to our catfish gear and hauled in about a half dozens cats in the last 30 minutes of our day. They were perfect eating size, so we kept a couple to fillet. As we headed for home we had landed about a dozen bass with the biggest being the one pictured above and a couple more around 3 lbs. We caught fish on plastics, crankbaits, and topwater. My new Lucky Craft SKT MR crank in ghost bluegill was particularly productive.

Jackson just announced the addition of two more kayaks to their fishing line - the Cuda and Big Tuna. Check out the walk-through video: "Drew Gregory Models the Cuda and Big Tuna". I am already drooling over the Cuda, which looks like a great boat for lakes and bigger water. It will also be a platform from which you can easily stand and fish. And if it is anywhere near as good as the Coosa, I will probably be in love with it too.

I also finalized a job and sign the paperwork in the next couple of days. I don't want to say much until I do, but it will keep me in the area for at least a few more years. Hopefully I can get out on the water late this week and then I have an awesome trip planned, which is going to be a real curve ball from the ordinary bassin' blogs. Tight lines!
Posted by Drew Haerer at 6:54 AM