Everyone measures fishing success in different ways. Some like to catch as many fish as possible. Others just want to catch a big fish. And others yet are just happy to catch a single fish. I don't really fall into any of these categories - although I do try to avoid being skunked as much as possible. I am greedy - I want to catch a lot of fish and a lot of big fish. And sometimes I may be a little too hard on myself, but I take a lot of pride in figuring out the bite each day I am on the water. Today was one of those days that I am not sure how I felt about it. So I guess, for the sake of optimism, the glass is half full.

I got a late start, but hit a local river for a few hours in search of some bass. It was the second river I have visited recently that was much muddier than I thought it should have been considering it hasn't rained in a week or more. Regardless, I got my gear ready, launched, and started casting. The first two hours were slow...VERY slow. Finally, I got to an area and found a little pattern that was producing some solid 1-2 lb bass. After getting out to drag over some shallow sections I noticed a catfish ahead. He looked to be around 5 lbs and I figured, heck, he would make a tasty dinner. So I threw my shaky head out toward him. He looked for about 10 seconds then started to turn. I picked my rod tip up higher to shake the worm a little more when I felt something heavy. I had been so focused on the catfish that I failed to notice a 2 lb bass was chomping on my worm. I set the hook and landed him shortly after.

Without moving more than 10 steps, I re-entered the kayak and stood, scanning a slightly clearer portion of the river for fish. Out of the corner of my eye I saw another dark figure moving in the water. It was in the area of the catfish so my first reaction was - oh, he is back. Then I noticed another dark body and another...and another. A wolf pack of bass was headed toward me, now 10 feet from my kayak. I stood frozen in the Coosa as the bass approached and very delicately picked up my worm rod. I knew they had seen me and knew they were smart enough to turn around - all 4 appeared to be over 17". The first bass, a sure 5-6 lber, immediately turned and two of the "smaller fish" in the group followed. The last fish appeared to be doing the same, but then suddenly turned hard left and engulfed the lure with suction from its huge mouth. It was on! 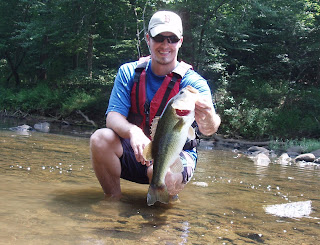 The river bass were fighting hard today - especially this 4+ lb bass
He immediately turned my Coosa 90 degrees and headed for the thick brush that lined the bank. Somehow I managed to steer him out of the mess of limbs and vines and keep him from going under my yak. He went airborne twice before finally coming to hand. The river bass weighed in at a little over 4 lbs. This would more or less concluded the half full portion of the day.

Over the next two hours I would lose a 4.5 lb fish boatside that ate a Spro BBZ-1 swimbait, see a 7-8 pound giant bass with mouth open turn away from my bait at the last second, and have a huge fish (gar, striper, bass...who knows?) hit and then pull the line under the boat with a force I have never felt. Subsuquently, he broke the line. Deep down I suspect it was a big gar, but I will never know.

However, I did land more small bass, 2 catfish, and an interesting looking Warmouth. All in all, I landed a dozen bass with the 4+ lber being the biggest before the near 100 degree heat chased me off the water. 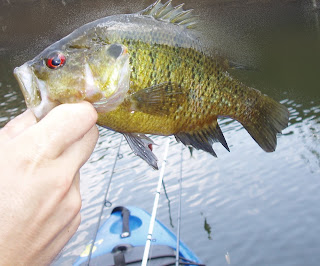 This Warmouth had serious teeth and looked like he belonged in the Amazon
So, was it a good day...maybe? Was it a day with a lot of "what ifs"...certainly. If I had caught a lucky break or two I may have been holding my biggest river bass of the year...heck maybe my new personal best. But sometimes these types of days happen and you have to focus on the positive. I caught fish under tough conditions, I caught one over 4 lbs, I got better at fishing swimbaits, I found a few places to try again in the future, and I didn't catch fire in the horrible heat. Of course, the fisherman in me wants to turn right back around and go give it another try....stupid thesis! Until next time....tight lines!
Posted by Drew Haerer at 4:00 PM