A couple of weeks ago Mary May and I decided it was about time we did some catfishing. A friend of hers from the Duke nursing school, Pauline, had been wanting to go for a while. Pauline grew up doing outdoorsy things from time to time and had a craving to give it another go after hearing Mary May speak of our adventures all semester. It was a chance for me to take her and a number of other people fishing who rarely get to go. Also joining us was Ashley (also from the Duke nursing program), Santosh (president of the Duke Fishing Team and super carp fisherman), and Chad (a good friend of mine from Duke who has been wanting to fish for a while).

The Friday evening weather finally looked good, so we packed up and headed out to Jordan Lake. Jordan isn't a great place to catch big cats from shore, but it is a good place to catch a lot of them. 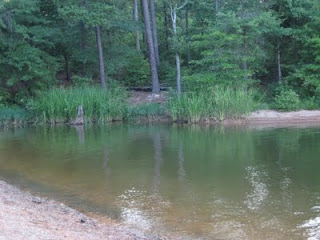 The view near our fishing spot

We got to the lake and found it busy. Plenty of pleasure boaters were out and about still enjoying the last hour of light. We set up on a secondary point where I have had some luck in the past. Pauline didn't stop smiling for the first hour as she helped bait hooks and set lines, watched Santosh mix some carp balls, and just generally took it all in. Within 10 minutes of the first line being out, Pauline got a bite. She reeled in a chunky little channel cat and was all smiles! 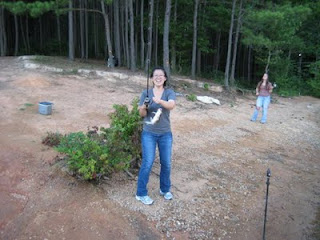 Pauline landed the first fish of the night!

Over the next hour or so the bite was slow. We picked up a couple of mudcats and small channel cats as Ashley, Mary May, and myself landed fish. Ashley also landed a bream on a big piece of liver. I think he may have been choking on it! Since it was slow, we decided to move down the bank about 100 yards to another spot. After we got there, the fishing picked up. Santosh landed a fish right off the bat and we were getting lots of bites. Then Chad got his turn. He landed a solid channel cat first and a minute later landed the biggest of the night. He admitted he never remembers catching a fish before, so I was super happy that he not only caught a couple, but also got big fish honors. 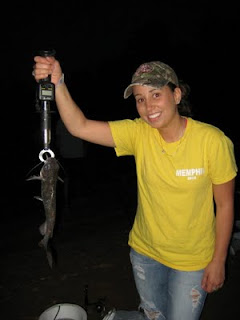 Ashley got in on the fun as well! 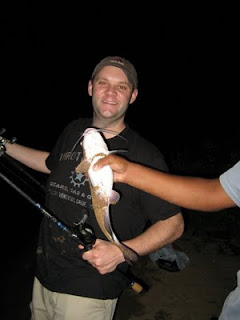 Then Chad landed the big fish for the night

At that point, Chad decided to go out on top and headed for home, as did Pauline and Ashley. Mary May, Santosh, and I stayed a while longer and caught about 10-15 more channel cats. They weren't huge, but were great eating size. We decided to pack it in around midnight, so I filleted the fish and we headed home. 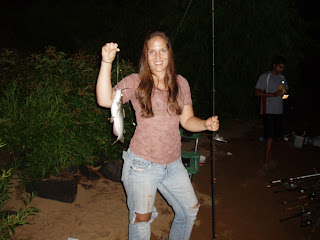 Mary May striking a pose with her cat

It was a really fun evening and I was so glad to see everyone smiling and having a good time. If anyone out there reading this wants to fish, just give me a shout and I will do my best to make it happen - whether it be from shore, wading, or from a kayak and no matter the species. Tight lines! 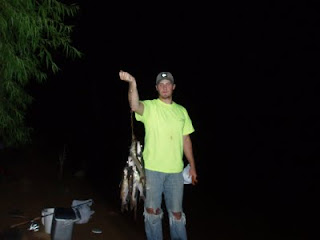 A good bit of filleting, but a lot of good eating!