Sometimes the river gives up her bounty and sometimes she takes in return. Most river fishermen, myself included, consider it the natural way of things - a somewhat karmic balance. The last time Mary May and I hit the river it was a scary experience and the river came away a littler richer that day. Yesterday we headed out searching for a few fish. I hesitate to use the word revenge, but we certainly wanted to put a few in the boat. This time, we walked away with big smiles on our faces.

Like most Saturday mornings, we slept in. I know that is contrary to the beliefs of most fishermen, but after the long, stressful week we had, we needed it. We decided we would try for the late afternoon bite and fish until dark. So, we rolled out to the river and were on the water around 4 PM. I hadn't fished this stretch since December and I was excited to give it a go. Thankfully, there was a cooling breeze and the air temp. was only in the mid-80's - a refreshing break from the recent heat wave. 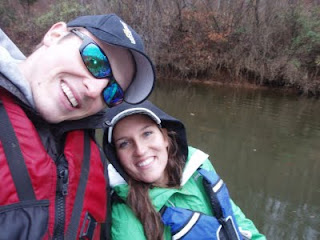 The last time we hit this river, it was 44 degrees

Our Coosa's crept quietly up the slow moving river. The water was stained, which historically has not been ideal for this stretch. We began flipping worms and throwing swimbaits, with little luck. We both had a few small bites on worms, but no hook-ups. Finally, I saw a gar break the surface near my bait. The fish, roughly 30" long, was extremely dark for a gar and a gorgeous fish. I swam my bait in front of his nose and gave it a shake. He turned, nailed it, and headed for the channel. I was suprised my hook had made it through his bone hard jaw, but the razor sharp Gamakatsu did the trick. I yelled to Mary May that I hooked a gar as he pulled my kayak hard left. As he came to the surface minutes later, she mentioned that she thought I had a stick stuck on the hook as well. I assured her that it was indeed the gar's long snout - a foot of razor sharp teeth. We decided it was going to be a chore to land from the middle of the river, so I headed for a nearby rock outcrop. But about 5 feet fromt he outcrop the fish gave one last run, turned his head, and cut through my line with his teeth. So close, yet so far - the fish would have been a handful regardless, but was fun to fight. The pre-historic monster must have been camera shy!

We continued on our way and still were struggling to get bites. Finally we came to a section that looked great and within minutes we both managed to lose a bass. But finally, a few casts later, Mary May landed a healthy largemouth to get rid of the skunk! I was really proud of her for getting the first fish and doing so while learning some new techniques. 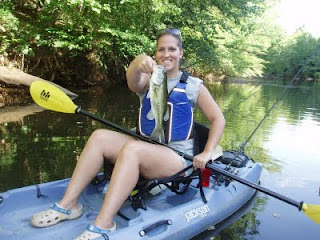 Mary May put us on the board first

Then we came to a slightly faster, narrower section. I threw my worm near a downed tree, but unfortunatley had thrown it over a limb. At first, I was discouraged that I had misplaced my cast. But seconds later I felt a bite, set the hook, and knew it was a big fish. He tore through the limb and broke another small limb in half. Thankfully, with a little coaxing, the fish headed for open water. He was pulling the kayak hard and turned my boat 180 degrees. At that point he broke the water between Mary May and I and we both gasped with excitement. After a good fight I lipped him and threw my head back in relief. The fish looked to be my biggest river bass of the summer. We got to the nearest shallow area so that I could get out and get pictures. The brute was heavy with a massive head and shoulders. Before we could get the first picture I dropped the fish in the water as it shook it's head. In a panic, I jumped on the fish and for a moment had flashbacks of Gollum from 'Lord of the Rings' as I pinned the fish down. Thankfully, I wrangled it and got a few pictures. Then I somehow managed to drop it again, catch it again, and get yet a few more pictures before bidding the fish adieu. Now we were both excited and re-energized. I knew that fish may have been a signal that the bite was about to pick up...and I was right! 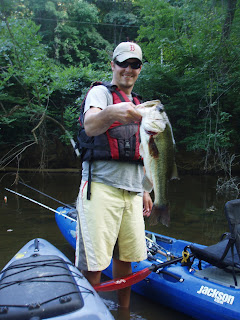 We got to the next hole and Mary May slowly worked a plastic worm through a channel with wood cover. After a few casts to the same area she hooked another big fish that pulled her Coosa and was pulling drag too. The fish had some shoulders and had her heart racing. But with one leaping headshake, he was gone. When moments like that happen it is hard to swallow. Some people say, "Ah, that's fishing for ya", but I knew exactly how she felt and that was not was I was thinking. However, she shook it off as best she could and kept on casting.

Over the next hour we caught a few more on plastic worms. We even took a break for Mary May to practice using a baitcaster. She did great with it and at that point, we wanted to give topwater baits a try - so I tied on a Storm Chug Bug for her. The Chug Bug is one of my favorite topwater baits and when used correctly, can really catch 'em. I offered Mary May some quick instruction, which she absorbed and replicated in no time. As I stood in my Coosa and was teaching her how to "walk the dog" with a Lucky Craft Gunfish I saw a nice 3-4 lb bass follow the bait in. On my next "example cast" a fish suddenly demolished the bait and I landed a chunky 15" bass. About a minute later, Mary May saw her Chug Bug get nailed, but the fish again slipped the hook. I paddled to her and gave her hooks a quick sharpening (something I was regretting having not done earlier).

We paddled to the next pool and I told her how I would set-up to fish it. She agreed and started working the area. I saw a movement near some weeds about 10 feet from her bait. I suspected it was a bass chasing baitfish and sure enough - her bait got hammered about 10 seconds later. She fought and landed the fish like a champ. 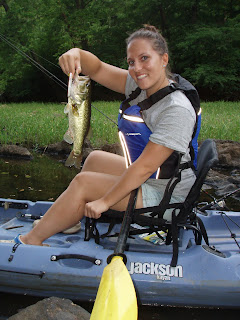 Chalk another smile up to the Chug Bug!

At that point we realized we had lost track of time. We needed to be back by dark and it was getting dark fast. We fished a short while longer and had a number of blow-ups, but no fish. However, the Chug Bug earned it's place as Mary May's new favorite lure. We met a very friendly local at the take-out, who we talked with while he helped us carry our kayaks. Then we were on our way home to make dinner and relax. The full, or near full, moon shown as brightly as I can ever remember as we cruised the backroads of central North Carolina.

All in all, we landed 9 or 10 bass with some nice fish thrown in. I think we would have seen that number double or triple if the water had been clearer, but I can't complain. We both had a great day and really enjoyed each other's company on the water. It made me wish I could do that every day. Maybe I should go buy a few lottery tickets?!

Until next time, tight lines!
Posted by Drew Haerer at 12:40 PM