About a month ago I was lucky enough to win a Gerber pocket knife by way of the Outdoor Blogger Network’s semi-weekly contest. I have been a big fan of Gerber over the years, having used their hatchets on many occasions. Not to mention when I was a teenager the original Gerber Leatherman hit the market, and what outdoorsy teen didn’t want one of those! So needless to say, I was excited to get out and test it.
The exact knife is the Gerber Answer SM. It has a 2.75” blade, F.A.S.T. Technology opening system, a textured handle, pocket clip, and a fully fine edge blade. First, the F.A.S.T. technology. F.A.S.T. stands for Forward Action Spring Technology. Basically, it is a locking mechanism on the side that is attached to a spring system that aides in opening and closing the blade. Although I found the button slightly illogical at first, after a few uses you get used to the system and it works like a charm. 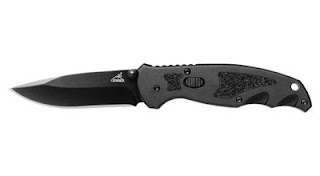 The blade came quite sharp and although I am typically partial to a blade with some serration as well, I liked the look of this one. I first used it during a move this past week to cut tape and boxes – a task it handled with ease. Then I raised the bar a little. I am in the process of making a base for a table out of green wood and wanted to see how it would handle trimming smaller branches from larger limbs. It cut quite well, especially when paired with a small hammer for the larger branches. It cut through smaller sticks with ease and after it was all said and done it remained pretty sharp.

I could only find a couple drawbacks to the knife. First, I have to wonder how long the spring loaded opener will work. To me, it feels like a part that may fail after a year or so of regular use. Second, the grip was a little small for my hand. The knife is made to be small and compact, but I found it to be a tweener. A slightly smaller or larger knife would have suited me better. And finally, I found the knife to be a little on the heavy side. Compared to many of the new knives I have seen, it seemed to weigh my pocket down more than expected. Again, this is nit-picking, but it was something that popped into my head. I will note that I did not use the pocket clip – in part because I don’t need everyone to think I am a bigger nerd than I truly am.

Would I recommend this knife to someone? Yes, I certainly would. It does everything a good little knife should do and is very sturdy and sharp. I put it through its paces and it did everything I could reasonably expect from a knife of this size, and at its price point. Plus, Gerber has always cared about customer service and satisfaction. Tight lines!

Disclaimer:
I received the Gerber Answer SM free of charge to test and review. The opinions expressed above are my independent thoughts and experiences.
Posted by Drew Haerer at 10:44 AM