Fishing in the Land of Flannel and Hockey - Canada Trip 2011

Nearly every May since the age of 14 I have been lucky enough to head to southern Ontario on what has become a regular fishing trip with my father and friends. Those 4 days are filled with fishing from the time we wake up to the time we sleep. Every year is a little different and that is why every year we show up and are so anxious we can barely sit still. For much of the group, it is a trip before the season begins at Woodward Camp – an action sports and gymnastics camp in central Pennsylvania. For me, it is typically a nice way to end the semester. This year there were 6 of us who made the trip…and as usual, it did not disappoint.

The trip occurred during what I am calling my “road warrior” phase in May. It began by driving from North Carolina to Massachusetts then from Mass. to Pennsylvania. I arrived in PA on a Monday evening and we would leave for Ontario early Wednesday morning. I was happy to be home, albeit not for very long. One big surprise, and one that I am shocked my mother kept from me, is that my dad had bought a new boat. He upgraded the old Ranger to a newer 22.5’ Ranger Comanche with a Mercury 225 on the back. We were riding in style, and at a slightly higher velocity than my Coosa.

We arrived in at The Poplars fishing lodge near Newport, ON on Wednesday afternoon. Thankfully the border crossing was a piece of cake and we hit the water fairly fast. My dad, Mike, and myself got on some fish quickly, but the trip definitely had some slow points too. I am not going to go through every detail of our trip, but here is a general run down….

The weather was all over the place. It started windy with some rain and moderate temperatures. By day 3, it was just flat out hot and sunny. And, the bite reflected the weather. We did best when there was some wind, which makes perfect sense, as wind stirs up baitfish and other fish forage. When in doubt, find the windy bank and wind blown points! 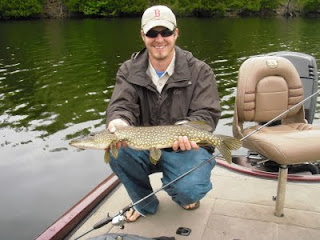 Typically we target weed beds and drop-offs in 8-12 feet of water on our late May excursions. But this year, that depth was rather barren. Ice-off was late in Ontario this year and the temperatures had been cooler than normal. This, combined with the zebra mussel boom, stunted a lot of weed growth. However, we weren’t even catching pike in 4-6 feet of water. Our best bite, by far, came in 1-3 feet of water throwing spinnerbaits and spinners through mixed weeds and lily pads. None of us had ever remembered the pike being so shallow, but they were there and were there in force.

We didn’t end up with any giants this trip and I think it was partially due to the fact that the fish were so shallow, as most bigger fish like easy access to deep water. However, we managed a couple fish right at 30” and about 10 more in the 27”+ range. We also landed quite a few nice bass, although they were not in season and we were targeting pike. One day, we probably would have had about a 16-17 lb 5 fish limit, which isn’t too shabby for those lakes. On a couple of days we caught more than 100 fish between the three of us – a mix of pike, largemouth, smallmouth, rock bass, crappie, perch, and the occasional bluegill.

Our best baits were spinnerbaits that looked like bluegill, particularly those with some dark colors in them. They were able to cut through much of the shallow weed cover with ease and mimicked the sunfish that we could see everywhere in shallow water. Other producers were the old faithful Mepps #4 and #5 in copper, gold, or red, the X-Rap, and the Lucky Craft Flash Minnow. The jerkbaits did very well in areas that were slightly deeper and weedy, but as I mentioned, these areas were few and far between.

The boat ran like a gem and we all had a great time. This trip made me realize some of the steps I have taken as a fisherman. I credit that to the time I spend on the water and the great friends I have to fish with and share ideas with. There is nothing better than going through a few rough spells before you figure out the pattern and then…WHAM…it is on!

Anyway, we got back to PA on Sunday evening and Monday morning I got up early to drive the 7-8 hours back to Durham. That means I logged roughly X miles on the road over the course of a couple weeks. I am tempted to say “what a long, strange trip it was”, but that wouldn’t be accurate. It was long, although it went by fast, and it wasn’t all that strange – except for the pike being crazy shallow.

Check out some footage of our trip, including a pike nailing a spinnerbait caught on film from underwater! Here ya go....

Until next time (tomorrow), tight lines!
Posted by Drew Haerer at 9:48 AM