Last weekend Mary May and I headed south to hit the river. I haven't been fishing much lately, so I was eager to get out. We got there and found a lot of people - many of whom were camping. After paddling beyond them all we caught about 6-7 bass on buzzbaits and spinnerbaits. Then we decided to pull off and fish for cats. Mary May landed a nice 17" cat and lost another that was probably 5" longer. We caught a few more sub-15" fish as well. The wind was picking up fast and blowing grey clouds, so we decided to pack it in and head back toward the vehicle. About 100 yards up-river the wind really picked up and all of a sudden a gust came that knocked off both of our hats and ripped the sunglasses off of my face. Thankfully I caught my hat and glasses and put them behind me. At this point I was paddling as hard as possible and going nowhere. The wind was picking water and debris up and just blasting us with it. Mary May's hat hit the water and as she turned to grab it another huge gust - undoubtedly the biggest I have ever experienced in a yak - flipped her. As I turned to help her it nearly flipped me as well and I was forced to abandon ship or lose gear to the river. 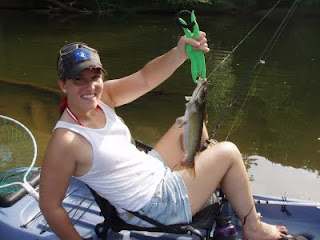 My adrenaline was roaring as I could see Mary May was visibly shaken. It was the first time she had ever flipped and the water was deep enough that she could not touch bottom. Thankfully, we always wear our PFDs because you simply never know. This was one of those circumstances for sure. Without them, it could have been much worse. Anyway, we got her boat upright and swam them to the nearest shore. At that point, we took inventory and thankfully only lost a couple of rods, 1 flip-flop, and some less meaningful things. I didn't care about any of the stuff we lost and was just happy we were OK. At that point, the river was blowing white caps like I have never seen on a small river - in the 2-3 foot range. Limbs were falling in the woods behind us every few seconds and thunder and lightning bursts hit every couple of minutes. It was a sight I will never forget.

Finally, everything slowed down and we made a hard paddle for the vehicles. About 2 minutes into our paddle one last lightning bolt pierced the sky and we probably looked like olympic paddlers in our yaks. We got to the truck in about 15 minutes and by then the skies were clearing and sunny. Although the evening bite was still in front of us, we had, had enough for one day and packed it in.

We found out later that the wind had actually done some damage to our friends house not too far away. They had a trampoline, which was bolted into the ground, uprooted and blown into the woods. And her neighbors above ground pool was ripped out of the ground and went through the wall of their house. Another of their neighbors had porch fan ripped from the ceiling.

It was quite the adventure and a good experience both for us both in terms of learning and always being careful. Tight lines out there this summer and stay safe!
Posted by Drew Haerer at 11:29 AM