First, I have to apologize for delaying this blog post for so long. I have been as busy as ever the past week or so and am finally getting a chance to sit down and put my thoughts into words.

Two Fridays ago, Bill and I met in Durham and headed north to The Appomattox River Company in Farmville, VA for the RiverBassin Trail pre-tournament meeting. We rolled in right on time after a fairly short and scenic drive. Much to our suprise, there were very few people there. The crazy spring weather had caused the rivers of VA to be high and muddy for quite some time and I think that kept a lot of people away. But, despite the low turn out, we were determined to go out and do our best....and hopefully find some fish too! I got to meet a number of great river bassers, including Aaron 'BigYaker' Dryden who runs the Heroes on the Water chapter in VA.

As usual, Bill and I left our decision of where to fish until the last minute. After researching all week and keeping a close eye on river gauges, we decided to fish the James River below Scottsville. The gauges were showing a falling river and we knew it would be warming and clearing up as well. However, it was still flowing pretty fast - about 6250 CFS. After gearing up and getting a few hours of sleep, we were on the road and headed for the launch. We got there around 6:30 AM and took our time getting ready. The air temperature was around 45 degrees and our teeth were chattering. After getting set-up we launched and headed down river to a smaller, tributary river. 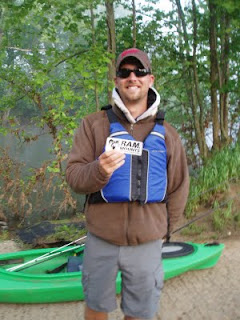 Bill is ready to rip some lip!
The flow was quick, but it didn't seem THAT bad....that is, until we got to the feeder river and turned the noses of our yaks back against the current. We looked at each other and realized that we were going to have our hands full. But that was quickly forgotten because no sooner did we pull into the small river when I looked up to see Bill with a small smallmouth bass that hit a topwater plug. It measured around 10.5" and was a good start! Shortly after, I landed an 11.5" fish on a plastic worm. We were on to a little pattern in this small river, but knew the skinny water probably wouldn't hold many fish over 15". I landed another 11" smallie and Bill hit a 14.5" that was a chunk. Thankfully, I got a limit, albeit a small one, before we pulled out of the river - so I was feeling decent given that it was only 9:45 AM. 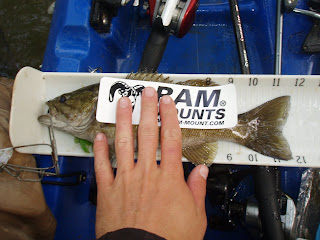 My first fish of the day - not a giant, but a start
We then spent the next hour or so "prospecting". We tried a fishing some eddys behind islands with no luck and finally pulled into a braided channel that had looked good on the map. However, we only managed 1 fish there - a 12.5" smallie that hit an R&S Baits Pro Assassinator spinnerbait. At that point, we decided that if we didn't get a couple good fish soon, then we were going to "hit and run" a few rivers on the way back to Farmville. We paddled hard upstream at a pace that felt like about 1/4 mile per hour. We were getting our butts kicked, but slowly - very slowly - making headway. Originally we were headed toward a small grassy island, but an area caught my eye across a small channel, so I headed there instead and Bill headed for the grass island. 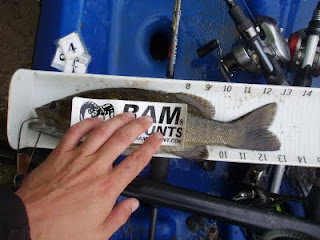 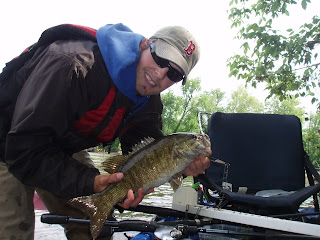 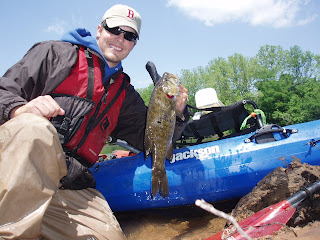 Big smallies (this one 18.75") love crankbaits
Unfortunately, neither I nor Bill would manage another fish before we had to leave. He had two for 25" and my best three went 50.25". Our team total was 62.25" - an average of about 15.6" per smallie. I was nervous driving back to the ARC and was trying not to jinx myself. As we pulled up and reports came in, I knew my stringer was toward the top. And after some waiting the great news was confirmed....I had won! I was unbelievably happy and felt redeemed after losing a winning fish the weekend prior. Bill and I also came in 1st in the team division - a huge win for RippinLip Outdoors! 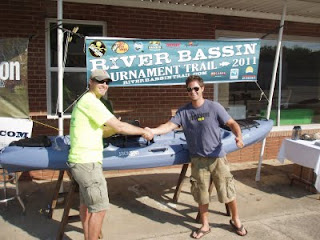 Redemption...and a beautiful boat to boot!
I owe a lot of people a big thank you - my wonderful girlfriend Mary May (who let me fish the event even though she had an incredibly important final exam that day), The Appomattox River Company, the RiverBassin Tournament Trail, Drew Gregory, Bill Kohls and RippinLip Outdoors, my family, Brett Hinson & Carolina Custom Rods, Great Outdoor Provision Company, Gary Ribet, and R&S Baits...to name a few. Also, a HUGE thanks to everyone who reads this blog. I really appreciate everyone who tunes in to read and as always, if any of you want to go fishing just drop me a line. Oh, and feel free to comment too!

So, I got to pick out a new Coosa from the stock room at ARC. First, WOW, what an awesome stock room! Second, I had some cool color choices, but I wanted something unique and sharp looking to boot. I chose slate, the original slate that is, a color in which very few boats were made. It looks like someone poured Duke blue and baby blue in a mixer - then called it "slate", which looks different depending on the light. Both Bill and Mary May were super excited. Bill gets to use it for our upcoming tournaments and Mary May gets to use it the rest of the time. 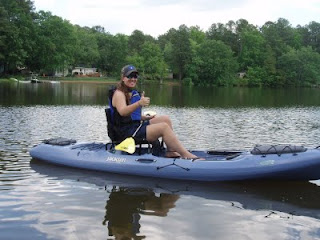 Good lookin' girl, in a good lookin' boat
In fact, we took it out a couple days later to get it slimed. We didn't fish long and she didn't land a fish....but she did land a snapping turtle, so that counts right?! She really liked the boat and stood with ease within minutes. If anyone wants to try the Coosa (Kev and Gary, you are already on the list!) just drop me a message. Until next time, tight lines! 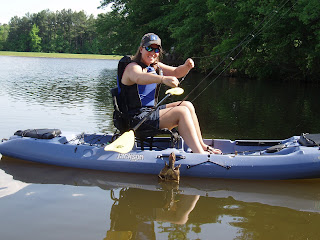 Turtle soup anyone?
Posted by Drew Haerer at 11:54 PM