Saturday kicked off the 2011 RiverBassin Tournament Trail in Charlotte, NC. As the name suggests, the RiverBassin trail is all about catching black bass species in rivers and creeks. This year there are 10 stops in the Bedrock Series, with locations in NC, GA, AL, KY, TN, WI, AR, and VA. There is also an Everglades series and Texas Hill Country series for 2011. Last year I fished the Charlotte RiverBassin stop and ended up in 6th place. It was a frustrating day for me in which I couldn't catch a break. However, I did hold on for a respectable finish in a field of very talented anglers. That tournament was on a hot day in late June.

Now fast forward to last Monday. I signed up for the tournament and fellow RippinLip Outdoors pro-staffer Bill Kohls agreed to partner up to fish the team division. However, the weather looked bleak. Temperatures were supposed to be in the 40's with overnight lows in the 30's. On top of that, heavy rain was expected. Now, I am not always inclined to believe weather forecasters, but this week they were right on. By Thursday a lot of the local flows looked like chocolate milk and had very strong currents. I knew that my first few choices of rivers would be out of the picture. On Friday, April Fool's Day, I headed to Charlotte for the captain's meeting, but took some extra time so that I could detour and scout a few rivers along the way. I found one river that looked appealing and knew it may be a good stretch. However, I just wasn't sold and was trying to run all the scenarios through my head - especially because I knew that a few stretches of water out west would be fishing pretty well and have a lot of big fish. 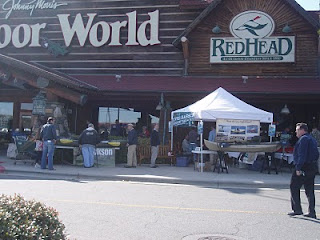 I got to Bass Pro Shops and talked with Terry, an angler from Kentucky who has a yellow Coosa. I then met Bill and we wandered the aisles of BPS to pick up a few odds and ends. I saw a lot of familiar faces and a few guys who really know the rivers of North and South Carolina. I also got to talk with Drew Gregory for a bit before he got things started. After the meeting Bill and I dropped his car at a a friend's place in Charlotte so that he could pick it up after the tournament. Then we headed back to his place in Winston-Salem. We were discussing all of our options and finally, with the help of friend Chris Ferguson, we decided on a stretch of river that we thought would hold some fish. I am not going to disclose the name of the river, but it is located in central NC, right in the heart of the Piedmont. 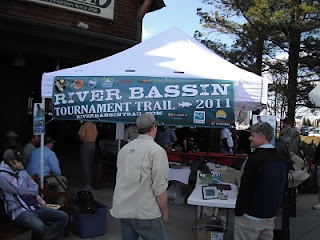 Sporting my new GOPC Kayak Fishing Team member shirt at the weigh-in (Photo by Brian Cope)
We got back to Bill's and realized that he had forgotten his garage door opener. My initial reaction was - "so what". But then he explained to me that it could only be operated electrically and all of his fishing gear was inisde. I had agreed to let Bill use some of my gear, but he ended up asking Chris as well. Thankfully, Chris came through again and let Bill borrow some gear for the tourney. After that we spent a few hours night working on our RippinLip Outdoors video & drinking Bill's top secret bloody marys before finally crashing around 2 AM. I wasn't really tired before that anyway, as I rarely sleep more than 3 hours before tournaments - much like a kid at Christmas. We were up bright and early at 4:15 AM and on the road shortly after. The air temperature was 36 degrees and I was beginning to wonder if we would get a bite all day. We pulled up to our launch, unpacked the gear, and hit the water a little after 7 AM. 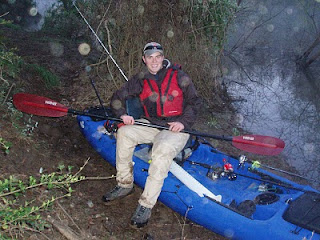 Ready to launch!
The water had a misty steam over it and looked beautiful. It was stained and visibly higher than normal, but it was fishable. I was armed with the usual suspects - Deep Creek Lures soft plastics, R&S Pro Assassinator Chatterbuzz spinnerbaits, a crankbait and a jig tied to Carolina Custom Rods. Finally, we got to a rocky area and rocks typically hold more heat than any other river feature. So we started throwing jigs, crankbaits, plastics, and just about everything else at that stretch without a bite - although I had something hit a crank that may have been a bass, but I am pretty sure was a stick or tree limb. Then I spotted an area with a large eddy. We both looked at each other and knew it should hold fish.

We beached the yaks and set-up to fish it. I waded out toward the middle and Bill stayed on shore. No sooner did he start casting then I look over and see Bill land a fish - a chunky bass on a crankbait. I came over to help him land it and get a few pics - after all this was his first kayak fishing tournament and first Catch-Photo-Release (CPR) tournament as well. He didn't really need my help as he was pretty much a natural. I waded back out and no sooner did I get to the middle he landed another. This time I gave a thumbs up and kept fishing. 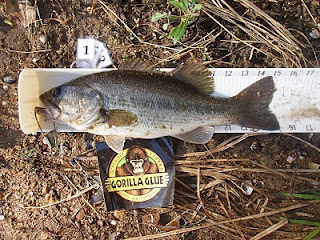 I was excited that we now had half of our team limit and was ready to get a bite. I eventually tied on a Lucky Craft Pointer 78SP jerkbait and started slowly working it through the eddy. About 10 minutes later I got a good strike. I fought and landed a solid fish - 15 1/4". I was on the board and feeling good. After getting a few photos I waded back out and 15 minutes later I landed another solid fish - a 14 1/2" chunk that crushed the jerkbait right behind a rock ledge. The fish gave us a limit as a team and I was now only 1 fish away from an individual limit...and it was only 10 AM. 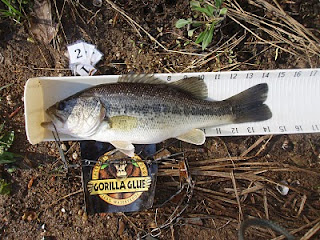 I started exploring the area a little more and fishing other eddies without any luck. Neither Bill, nor I were getting bit so we moved to other areas and let the large eddy rest. I was fishing a plastic around some logs when again I look over and see Bill with a fish. It was another crankbait fish for him and it gave us both a little more energy. We headed back down to the big eddy, but this time we couldn't garner a bite. So, we decided to paddle up-river to another rocky area we had seen on a map. We made the 1/3 mile paddle to find an incredibly windy section of river. I attempted to fish it for about 10 minutes before giving up as I was getting blasted. I turned the Coosa and started paddling like crazy to get back down river. I knew time was running out and I kept saying "never give up, never give up" as I went. After all, during my last outing with Bill I didn't catch a fish until we were about to put the boat on the trailer (see my last blog).

I got there, beached the yak, and started throwing the same jerkbait. On my second cast I nearly had the bait to the bank when - wham - I felt the strike of a good fish. She hit the bait on the move and headed straight for cover. I was able to fight her to shore and land her. The bass measured slightly over 17" and both gave me a limit and upgraded our total team limit. We fished a little longer and Bill landed one last crankbait fish - another just short of 14". 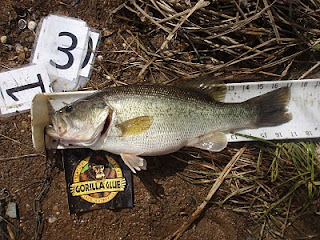 A hefty 3rd fish that would finish my limit 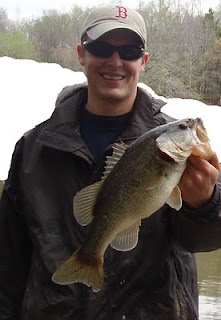 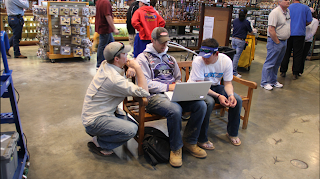 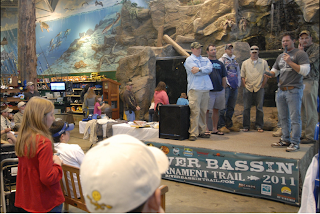 The top 3 teams, including Bill rocking his RippinLip Outdoors jersey (Photo by RiverBassin Trail)
Then came the individual competition and I was hoping to be in the top 8. It turns out, I saw my name and the name of two others listed on the screen to come up on stage. After 2 fish (of the 3 fish total) there was a three way tie. Drew G announced the 3rd fish of Brian Cope (turns out he does a lot of writing and has a new blog) - a healthy 15.75" bass. Next came my final fish - the 17 incher that gave me the lead. But, the last fish trumped them all. Eric Boyd's final fish was a 19 1/4" bass, giving him the victory by 2 inches. After saying some thank you's, he gave his grand prize - a new Jackson Coosa Elite, to his fishing partner and mentor Caja...awesome! Coincidentally, a few months ago I asked Eric if he wanted to partner up for this tourney, but he had already agreed to partner with Caja. He is a great guy and deserves a huge congrats! I hope to take him up on his recent invitation to chase smallies down in his neck of the woods. 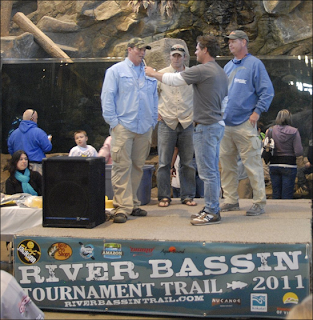 Eric, Brian, and myself after announcing the top 3 (Photo by RiverBassin Trail)
The full results can be seen here, recap here, and media gallery here.

The Great Outdoor Provision Company was well represented as well. Kayak fishing team member Bo Anders (out of Charlotte) landed the big bass for the day, a giant 23 1/4" river bass. He also added a 21" fish, but couldn't catch a third for his limit. His partner Tim (Stu) Stewart is also a GOPC kayak fishing team member (and Hardcore Kayak Fishing headman) and they finished 3rd in the team division (although there was a mix up at the presentation so their 3rd place finish was not confirmed until later). I also got to meet Charlotte GOPC watersports guy Gwen Crabtree, who had a solid day on the water himself. Overall, GOPC members took 2nd and 5th place in the individual division and 2nd and 3rd place in the team division! 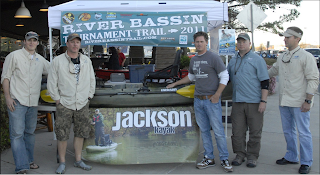 Drew Gregory posing with the GOPC crew (Photo by RiverBassin Trail)
A huge thanks to Bill for agreeing to partner up with me, to Chris for helping us in multiple ways (we seriously owe you one!), for the support of Mary May and many of my friends & family, to Brett Hinson at Carolina Custom Rods, and to Drew Gregory and company for putting the tournament together. It was an awesome time and one of the most fun tournaments I have ever fished in. The team aspect was a blast! I also couldn't believe how extremely accurate the 7'6" casting rod Brett built me is. Long rods like that are known for distance, which it definitely has, but his innovative spiral wrapping with micro-guides is super accurate too!

Since the shoulder felt just fine on Saturday that means it is time to get back in the kayak and start fishing hard again. Hopefully I can get out on the water later this week and catch some big old pre-spawn largemouths! Until next time, tight lines!
Posted by Drew Haerer at 2:14 PM