Today I met up with good friend Danny "DANNYBOY" Morales. Danny is one of those guys who you can tell loves kayak fishing. He is constantly smiling, laughing, joking, and just having a ball on the water. We have been trying to hook up to fish and I was excited when an opportunity arose to head down to one of his favorite areas of Falls Lake.

I knew going in that the males were shallow and very aggresive, so I decided that I wanted to work on two things for the day - fishing a shakey head and a jig. It turns out I didn't fish the jig all that much, but did land 2 fish on a Strike King Bitsy Flip with a trimmed Deep Creek Lures Floating Flippin Crawdad trailer. I also fished with the Deep Creek Sink & Catch worm. 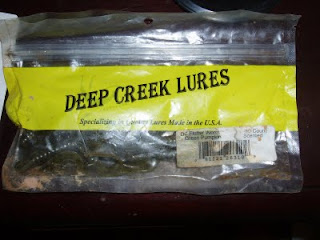 Deep Creek Lures - the best way to have your house or car smelling like super secret garlic sauce!
After trying an R&S Baits Chatterbuzz buzzbait with no luck (because who doesn't love an early morning topwater strike), I went to work with the Sink & Catch worm and the new Deep Creek Flutter Worm rigged on a shakey head. The Sink & Catch style of bait was recommended in this part of the lake and sure enough, it produced a few fish early. Then my bite seemed to die down, so I picked up the Flutter Worm and started meticulously fishing it around laydowns, rocks, and drop-offs. It didn't take long before I landed my first bass off of a large boulder. I spotted the underwater boulder while standing in my Coosa - man I love that boat! 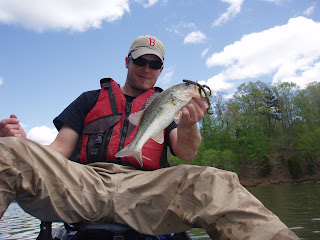 An average size Falls Lake bass for the day - around 13"-14"
Then I stopped to shed a few layers and got a good look at the Flutter Worm in shallow water. It looked dangerously good and sure enough, it caught 3 more fish by the time I left that cove. I then returned to the main lake and fished some blow downs. I didn't get a bite there, so I headed back to a cove with a creek feeding it. It didn't take long before I had 3 more fish on the Flutter Worm - two of which crushed it on the fall. I had to re-tie, so I tried texas-rigging the Flutter Worm. Like clockwork, fish were crushing it around logs and stumps and I quickly racked up another 8 fish. 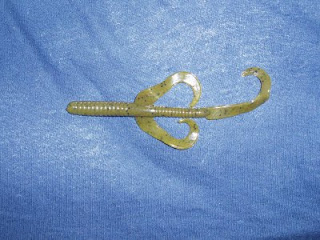