I had the itch! Everyone was giving reports of females starting to move shallow and fish biting like crazy. I knew I could only read so many reports on internet message boards before cabin fever would set in. Mary May was equally stir-crazy since she has been studying like a mad-woman for her nursing exams. So, yesterday afternoon we decided to hit the lake and enjoy the beautiful weather.

I have been scoping this lake out lately and was eager to try it. We got our gear set-up and hit the water running...err...paddling around 1:45 PM. The wind was whipping pretty good, with some gusts pushing 20 MPH. It made fishing plastics, which were our primary baits, rather difficult. We both started with Deep Creek Lures Sink & Catch worms in green/brown colors. I also had a Deep Creek Flutter Worm, R&S Baits Spinnerbaits, and Strike King Red Eye Shad tied on.

Immediately, we both noticed that the shoreline was loaded with panfish. The small bream were attempting to eat our plastic worms - with little luck. Finally, I got a slightly better bite, albeit very slight. It was about a 10" bass that I hauled from under a dock. He made it about half way to the boat before spitting the hook. It wasn't much of a start, but it was a start. We let the wind continue to blow us down the bank, but gusts were blowing us very fast, making fishing quite difficult. Just before we ducked for cover into a cove I decided to throw one last cast to some shoreline cover. I moved the bait a few times and then it got hammered. I saw what looked like a pale colored bass hit the bait and run hard sideways. But, after I stood I realized the fish was actually a big crappie. I brought her to boatside and put her on the stringer. At 14.5", she would make a fine meal, even if she wasn't the target species.

After paddling across the lake, and getting wind blasted along the way, we pulled up to a shoreline and started casting. It looked like a great spawning area, but I wasn't spotting any fish on beds. After about 10-15 minutes I heard splashing and looked over to see Mary May hooked up with a nice bass. She wrangled him into the boat and I paddled over to get some pictures. He was incredibly thick and weighed a solid 3 lbs....her new personal best largemouth! 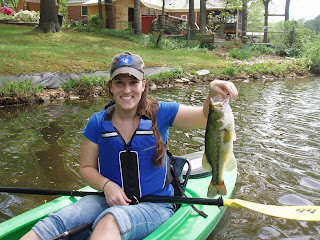 We kept fishing and getting blown around before finally coming to another cove where we were semi-sheltered from the wind. I lost a small bass near a rock pile and was getting a lot of bites from bream. Finally, I skipped my bait under a large dock and it got hit hard. The fish nailed the Sink & Catch worm and headed for deep water. He fought like a truck and I eventually got him to the Coosa. He weighed in at 4.5 lbs and was a gorgeous fish...for a largemouth anyway. 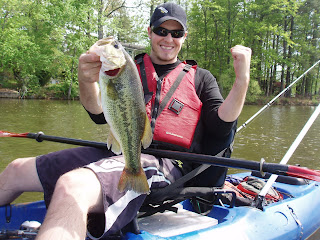 I ended up with two more nice bass - 4 lbs and 3.5 lbs - and lost another in the 3.5 lb range. All were caught in the same general area on Deep Creek worms. After fishing a little longer we were getting absolutely blasted across the lake. So, we headed across the lake to a small cove tucked out of the wind. I threw my worm out near a rocky area. I felt a "tap, tap, tap" and knew it felt a little different. At first I assumed it was another bluegill, but then it started pulling hard. I set the hook and a short time later saw the blueish tint of a channel cat surface near my yak. He looked as if he had swallowed a baseball and what he lacked in length he made up for in girth. Not two minutes later I looked over to see Mary May's rod doubled over. She had hooked her own channel cat, which hammered her spinnerbait on the fall. Her fish was a little longer and also quite fat. Both cats were welcome additions to the stringer. 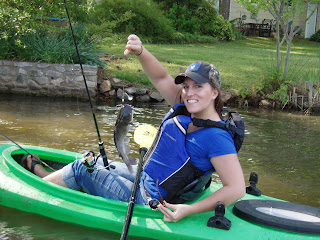 Check out the video I put together, shot with the GoPro Hero HD:

At that point we had to call it a day. After 4 hours we had managed an awesome mixed bag on a lake that was new to us both in some pretty tough conditions. I can't wait to go back on a calmer day. Later that night we breaded and fried the fish....man is fried catfish tasty (my mouth is watering right now)! I hope everyone is out there enjoying the weather as much as possible and putting fish in the boat to boot! Until next time, tight lines! 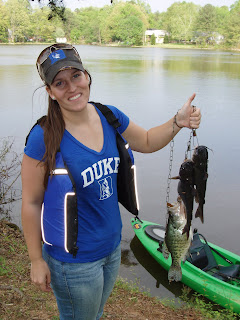