Just over a year ago I got a random Facebook message from Mary May. She explained that she was coming to Duke to pursue a nursing degree and masters in nursing in the fall and was contacting me because I was the VP of the Duke Fishing Club and Bass Team. She went on to say that she was an avid outdoorswoman who loved to hunt and fish. In fact, in 2005 she shot 3rd largest non-typical whitetail in Massachusetts history and the largest ever harvested by a woman in the northeastern US. It scored at 198 7/8 with Boone and Crockett and had 15 points with 5 drop tines. Needless to say I was impressed. Over the next few months we exchanged the occasional message related to fishing, Duke, Durham, and a little about us and our rural backgrounds. Little did I know, we would start dating in October 2010 and we quickly got on the water. And, it was evident that she knew what she was doing. 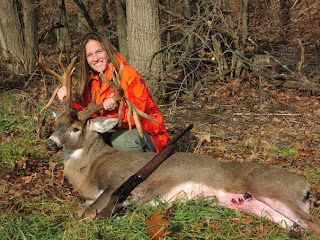 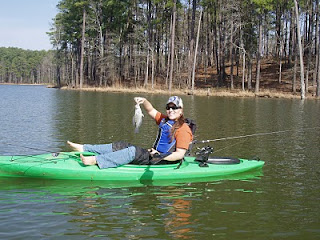 This winter we made a few trips in some tough conditions, so the recent warming weather has been a treat for us both. Two weekends ago temperatures were pushing 70 degrees and we wanted to hit the water and catch dinner. Given that I knew the usual places at Jordan would be packed, I looked at a lake map and found 3-4 spots I thought would hold fish and be escapes from the weekend crowds. We launched and spent some time paddling around checking out the bottom on my fish finder. After a couple hours of checking out some new areas we had only a lost white perch to show. Finally, Mary May yelled that she had a fish and as she hoisted it into her yak I could see that it was a good one. It turned out to be a 12" crappie, which went to the stringer. We then went awhile without a bite, while searching for fish. Finally, we came to a spot I thought looked quite promising on the map. It didn't take long before we had a bite - a decent 10" crappie. Over the next 3 hours we caught fish after fish with a keeper rate of nearly 40%. After putting 14 on the stringer between the two of us we started throwing back keeper size fish. As evening set the bite slowed there so we moved to one last spot near the launch. I was marking a ton of bait there and we quickly hooked up with fish. After landing another 10+ fish in about 20 minutes, including a few keepers, we decided to call it a day - as darkness was upon us. Overall, we landed 60-70 fish with the biggest 4 being right around 13". They made for an amazing dinner when we got home. 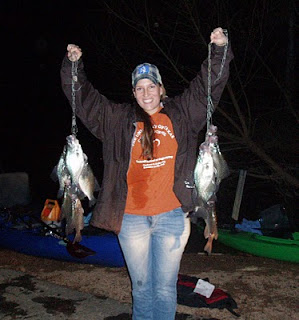 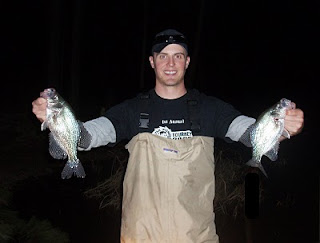 We hit the water again last Friday. It marked one year since she sent me that first message, so we wanted to celebrate on the water. Unfortunately, we only had about an hour and a half. So, we decided to give the pond a try at her apartment complex. We headed down to the small pond and found that it was quite shallow and had a lot of algae. But, within 15 minutes Mary May landed a nice little bass. She also lost 1-2 more that didn't quite get the hook. I went fishless for nearly the entire time until I managed a small bass - literally 5 minutes before we had to leave. It was a fun little trip and a fitting way to celebrate! 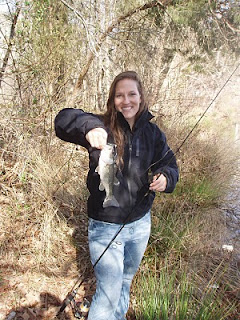 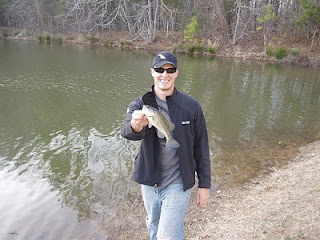 Then we hit the water again this past Monday. We slept in and got a very late start, so the river I wanted to fish was looking like a long shot. Instead we decided to head back to Jordan to chase crappie. Again, we wanted some solitude, so we went to the areas we had so much luck the week before. We also decided that we would only keep fish over 11.5". The weather was significantly windier than had been forecasted, but we got set up and used the wind to set up drifts over the area. It didn't take long before we had our first few fish - all over 11.5". I lost another at the boat that would have been close to 13". But, that was just the beginning. A short time later I look over to see Mary May's rod bent totally over and I see her hoist a giant crappie from the water. The fish was as fat as any crappie I had even seen. The fish measured a hair under 14" and weighed 2 lbs 4 oz. We kept catching fish, but 10-15 minutes later I heard her drag being pulled. I looked over to see her working on a big fish. What she brought out of the water was easily the biggest crappie I have ever seen in person. As she brought it out of the water the fish gave one last bolt of energy and it broke the line while hanging in mid-air above the front of her yak. My mouth dropped and she screamed in frustration. She was pretty frustrated and I still don't know if she has shaken off losing that fish. We both estimated the crappie easily at 16" and probably over 3 lbs. The first crappie she caught was an NC citation/trophy size fish, but this one was a true giant that was simply mind blowing. 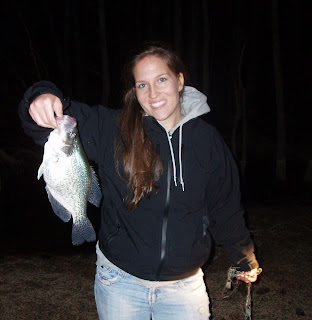 We went on to catch a bunch more fish, kept 10 over 11.5", and threw back a lot of keeper size fish including some around 11.5". We probably caught 50 fish in a fairly short day with a lot of fish over 12". And again, we left them biting as it quickly got dark and cold. Hopefully her big crappie wins as part of the KayakBassFishing.com Online Crappie Contest that ends next week. Unfortunatley, it uses length only, but she should contend for a top spot. 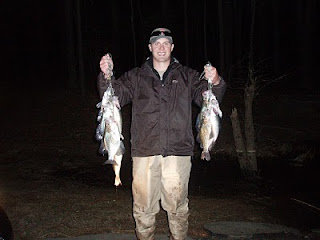 She is an amazing fishing partner who is pretty accomplished already and learns extremely fast. I can't wait to share more of my knowledge with her and see her progress even further as a fisherwoman. Until next time, tight lines!
Posted by Drew Haerer at 9:43 PM