I was able to sneak out for about an hour and a half last night to fish for white bass with my friend Paul McCall. Paul landed a nice white before I even showed up - a fish around 1.5 lbs or more. After moving upstream a ways, I got one of those strikes that simply stops your lure in its tracks. The fish was fighting his way up and down river as I tried to guide him around logs and rocks. He was giving my ultra-lite set-up all it could handle. Finally he was tiring, but the bank was steep and muddy and I was worried my 4 lb test would break if I lifted him to shore. So, I carefully worked him down river, reaching my rod around trees and briar bushes, until I got to a spot where I could land him. It was a brute - a fish which I would later find was a male that measured 17" and weighed in at 2 lbs 7 oz on verified scales. The fish is my personal best NC white bass to date and easily qualified for a NC Trophy Citation. I did catch another giant white a couple years ago, but never officially weighed him. 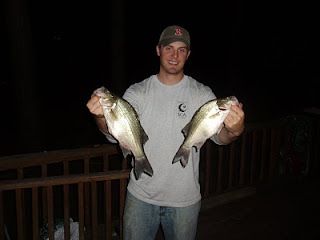 Two big white bass - including the trophy on the left (2 lbs 7 oz and 1 lb 12 oz)
Paul and I caught fish reguarly until dark and ended up with 30-40 when we called it a night. We kept a few to eat - all over 1.25 lbs and most over 1.5 lbs - except one runt that wasn't going to make it. The majority of the fish we caught (and kept) were males, but the females are slowly moving in.

It was a great night of fishing and a lot of fun. I am definitely making a return trip before the weekend.

Also, I am writing an in-depth article for RippinLip Outdoors that details a lot of tactics, techniques, and patterns for white bass. Keep an eye out on their site later this week for full coverage. Tight lines!
Posted by Drew Haerer at 12:39 PM