A while ago I was invited to join the RippinLip Outdoors team. It has been about 3 months now and I must say it is a really great group of guys with some very talented anglers. Bill Kohls is another RLO pro-staffer who lives in western NC. For some time we have wanted to get together and shoot some video on the water. We finally made it happen this weekend, as Bill was kind enough to haul his Ranger, outfitted with a Mercury 115 and Minnkota trolling motor, to Durham. This was a nice treat since my shoulder injury has kept me out of the Coosa lately. We were intent on chasing bass on Jordan Lake, since it is only 20 minutes from my house. However, a major cold front was pushing through - dropping temperatures from the 60's to the low 40's in just 2 days. Bill arrived on Friday night and we spent some time game planning for the next day. For us, that means looking over a lake map and finding areas we thought would have warmer water, spawning flats, and good pre-spawn areas.

After a few hours of sleep we were up again and headed to Farrington Point. We launched behind about 40 boats who were getting ready to fish the "Fishers of Men" tournament there. After getting our gear set, we headed for a rip-rap wall adjacent to a spawning flat. The air temp was about 45 degrees and water temp in the high 50's. I picked up my Carolina Custom Rods deep cranker paired with a Shimano Curado 200 DPV. The lure of choice was a Lucky Craft Moonsault CB250...in a secret color! On my second or third cast I felt a good strike, but the drag on the reel was set too loose and I was struggling to get my act together. Thankfully, the glass blank helped the fish stay on the hook, I cranked down the drag, and lifted a brute of a fish into the net (thanks for the assist Bill). It would be the start of a very good day on Jordan. 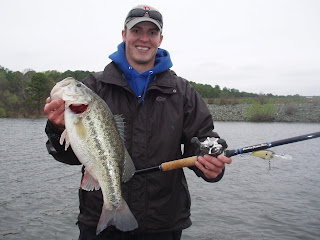 This fish was in the 5-6 lb class with a nice belly and thick shoulders
We worked down the rip-rap bank with no bites, so we turned and started fishing back down it. As soon as we got to the spot where we landed the big fish earlier, we were hooked up again. The spot was on a 3-4 ft depth change with a little pocket and within 20-30 minutes we landed 3 more. Bill landed a 13" bass on a small crank and I landed a 14" and 15" bass on the CB250 and a Deep Creek Lures coffin bill crank. At that point we wanted to check out some other areas, thinking the bass were biting everywhere.

We headed to a couple of creeks, but after a little scouting found that the areas weren't what we were looking for and water temps were too low. We then motored into Brush Creek where there were numerous boats crappie and bass fishing. We talked to a friend of Bill who was fishing a jon boat tourney. He said he got 2 early, but the bite had since been slow for him. So, after some more scouting and filming (we are putting together a promo for RLO) we headed down lake. We fished a couple areas with little success before finally pulling up to a dock in 8-15 FOW. After fishing it pretty hard, Bill tossed his shakey head under the dock with a lizard rigged on it. He got a good bite and lifted a 14" fish to the net.

We then went back to fishing rip-rap walls, but the weather was turning. The high pressure system was upon us, wind was picking up, and temperature was dropping. After 30 minutes or so at our next spot, Bill nailed another 14"-15" bass on a deep diving jerkbait. Then we spun around to the other side of the rip-rap wall and were marking a lot of fish. However, they were not interested in our crankbaits or jerkbaits and were slowly moving into deeper water. I picked up a spinning rod with a texas-rigged Deep Creek Lures 6" floating worm tied on. It wasn't much longer until I felt that characteristic 'tap, tap, tap' and it was on! Another 14" fish in the boat. And about 10 minutes later, I landed another 14"-15" bass doing the same thing. At this point we were freezing and decided it was time to take a few pictures and head home. Never have 15" bass looked so small compared to the brute in with them. This was also the point where I proved that I am kayak fisherman by trade, as my skills with a boat trailer were pretty laughable. 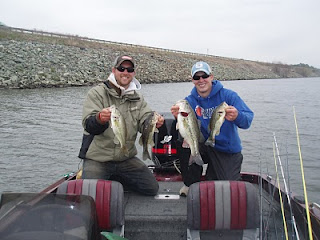 A nice stringer of Jordan Lake bass, although the giant dwarfs the rest
The next day we awoke to 32 degree temperatures, so we decided to wait until about 10:15 AM to hit the water. We knew the fish would be deep and looking for warmer water. To make a long story short, we tried a lot of spots, marked fish, but just couldn't buy a good bite. Around 2:30 PM we decided it was time to call it a day. As Bill left to get the trailer I told him, "I am going to catch one from that corner while you are gone." He laughed, as I was completely joking, but he did have a small bite there earlier, which he suspected was a bluegill. I picked up my Deep Creek Lures 6" worm again and tossed it toward some small rock. I felt a bluegill pick it up and had to laugh. I moved the bait a few inches, then a few inches more. Suddenly, wham, I had a fish! Smiling from ear to ear I landed a 14" bass while sitting in the boat parked at the dock. I waited a moment and hoisted the fish into the air as Bill pulled up with the trailer. I was laughing and he was in general disbelief. He turned the trailer around and started backing it down the ramp. I took one more cast and as soon as it hit the water "bam" another fish! This one fought like crazy and ended up measuring 15+". At this point I am sure my smile was as big as it could be and Bill got out of the truck to throw a few casts. Unfortunately, that was it, but it kept the skunk away!

We both agreed that we wasted some time in some tough areas that day and should have went with our gut and just found the warmest water possible that fished to our strengths. Either way, it was a great weekend of fishing and filming. Thanks again Bill for supplying the ride! Next weekend, I return the favor as we team up to fish the RiverBassin Tournament Trail stop in Charlotte...from kayaks! Tight lines!
Posted by Drew Haerer at 9:18 AM