I arrived at my childhood home in central PA to an empty nest. My parents were traveling; visiting my sister and her family in Wyoming - a trip I was unable to make due to other obligations. Knowing that they wouldn't get home until late Christmas day, it meant one thing - time to hit the local trout streams.

I stepped outside to find a cold breeze and 26 degree temperatures. Immediately, I turned around, went back inside, and got another fleece to wear. I hit the road and after getting squared away with a new license, I met up with my good friend Levi and his father Jim. We decided to hit a stretch of Penns Creek that we all grew up fishing - one that is extremely productive this time of year. It is a native stream, with trophy trout regulations and therefore a healthy population of big brown trout.

This time of year we like to throw big jerkbaits (3"-4") to lure the trout from their winter hiding spots. Color, retrieve speed, and size may vary from trip to trip depending on conditions, so it is important to let the trout dictate what they want. I decided to start with a 3 5/8" Yo Zuri Twitch n' Minnow in a gold color.

Armed with my ultra-light combo, I waded into the stream and within about 10 minutes I had my first bite. After a nice fight, I landed a 13"-14" brown trout, which would be about average for the day. The key seemed to be a retrieve with long pauses after each twitch/jerk of the bait. It was at this point I realized I forgot my camera and was relegated to camera pics for the day. 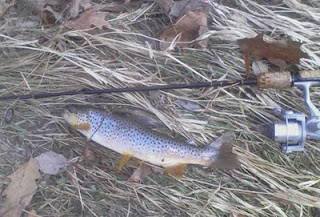 A few minutes later Levi landed another brownie - about the same size. His hit a Rapala Husky Jerk. We continued fishing and quickly realized the fish were being lazier than usual in the cold water. We were getting a lot of follows without strikes and fish were mainly holding in very particular areas. We fished for about 45 minutes more. I got to a new pool and on about the 3rd cast I saw a fish follow my bait from mid-stream and finally strike near the bank. After a short fight I landed a beautiful winter brook trout. Brookies are very rare in Penns Creek, so I was especially happy to have caught this 12"+ fish. Shortly after, Levi lost a nice brown trout near the bank. We then decided to drive to another stretch of stream that we thought would be productive given the conditions. 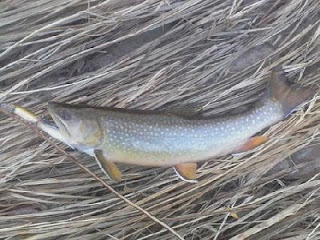 The new area looked perfect and sure enough, on my first cast, I landed a healthy 12"-13" brown trout. Over the next hour and half I landed 3 more brown trout around 13"-14" and 1 around 10". I also had 5-6 more fish follow to the bank without striking. I found out that Levi and Jim, who had walked down-stream, landed a few fish too. They had to get going, so we drove back to their place to grab my car. Originally I was going to head home, but after a moment of debate I decided to hit the stream for about an hour more. I went back to the same area and despite my best efforts only landed one more fish - another 12"-13" brown trout. I did lose a 15"-16" fish at the bank and had another 4-5 follows.

Overall, it was a great day landing 8 trout myself and seeing many more. Plus, fishing the beautiful, clear December water in Penns Creek is a treat in itself, especially when I can share it with friends. Believe it or not, I will be on the water tomorrow morning in hopes of catching Christmas dinner. Tight lines and Merry Christmas!
Posted by Drew Haerer at 11:37 PM