I went to bed on the 24th dreaming not of santa and reindeer, but instead limestone ledges and giant brown trout. My family was set to get in late on Christmas Day, so again, I loaded up the car and headed for the stream. I started in an area about 1/2 mile downstream from the day before in a deep pool. My first weapon of choice was a Lucky Craft 75 SP jerkbait in an MS aurora brown color. On my fourth cast this 14 inch brown crushed the bait. 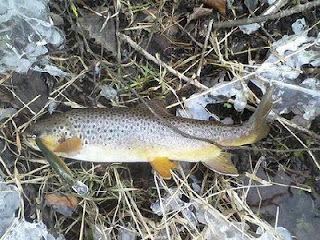 After getting a couple follows and landing about a 12" fish I switched to an in-line spinner as I fished through a faster section of creek. I went biteless and didn't see a fish for about 15 minutes, so I decided to switch to "old faithful" this time of the year. I tied on a 2 3/4" Rapala husky jerk in the silver with black back color. On my first cast I landed a chunky 14" brown trout and 2 casts later I hooked into this solid trout. 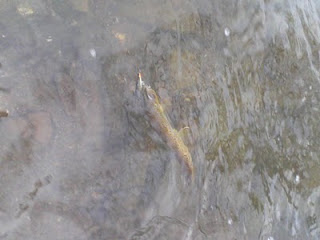 Shortly after I landed my best trout of the day - a hair under 17". Unfortunately, he slipped my grasp while trying to get my camera/phone out of my waders. I kept fishing and found 2 really consistent holding patterns for the trout and was landing solid 12"-15" fish regularly. The best part was that I could see most of the strikes, including one fish that I saw come out from under a rock, crush the bait, and head straight for the air.

I landed a bunch of beautiful brown trout and lost count somewhere past 15. I lost what looked to be a 17"+ rainbow, but thankfully a few casts later I landed this gorgeous brownie. 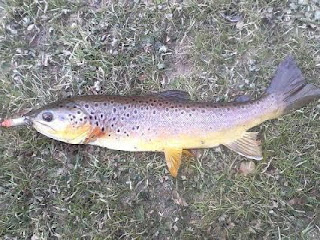 Finally, I decided to call it a day fishing the trophy trout section. I caught somewhere around 20 trout, had probably another 15 follows, and spotted another 15+ smaller trout. After that great day, I decided to head to a different stretch of stream in search of dinner. After about 5 minutes at one of my favorite winter holes I landed a chunky 14" rainbow, threw him on a stringer, and hit the road. Sauteed in butter and garlic, he made for a tasty Christmas dinner! Tight lines!
Posted by Drew Haerer at 2:37 PM