I spent the last few days in Pennsylvania visiting my family for Thanksgiving. I typically try to squeeze some fishing into every trip home, but hadn't originally planned on it this time around. However, my friend Travis convinced me to hit a local spot on Friday morning, but those plans fell through. Thankfully, my dad convinced me that he and I should hit a stretch of lower Penns Creek, a few miles above it's confluence with the Susquehanna River. Neither of us had fished this stretch in 4-5 years, but it is typically a good walleye spot with some smallies mixed in. We had also heard tales of muskie in this area from Travis, but had never actually seen one or had a confirmed encounter.

So, we hit the road shortly after 6 AM on Saturday morning and headed for the creek. When we left the house, the air temp was 31 degrees. When we made it to the creek it was 32-33 degrees. We hadn't spent much time looking at the weather, other than to make sure it wouldn't be raining and were hoping it would warm up quickly. Thankfully we had bundled up and we got set-up to catch some fish.

Now, standing in one area and casting over and over isn't either of our styles, but in this particular area (and targeting walleye) it typically works best. I started throwing a small plastic swimbait, then a grub, jerkbait, crankbait, tube, different color grub, and pretty much everything else I could find in my dad's tacklebox. I just could not buy a bite. The water was a little high, although clear, from recent rains and I was wondering if it would leave us skunked. This spot is typically best before 8 AM as well, but given the cold weather we both wondered if a warmer air temperature wouldn't heat up fishing too. Unfortunately, the weather stayed cold and it started to snow. Coupled with the windy conditions, we were getting cold quick.

On about my 7th trip to the tacklebox to tie on another bait I heard my dad say that he had a bite. I turn and see his rod doubled over. A nice winter walleye quickly showed itself and after a fight he landed the fish. 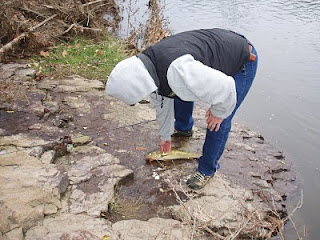 We didn't measure the fish, but estimated him to be around 22"-23". The fish hit a Rapala X-Rap Shad shallow diver in a gold color. Although we were both pretty sure that larger schools of fish weren't around yet, it was a good sign and I was relieved that we avoided the skunk! 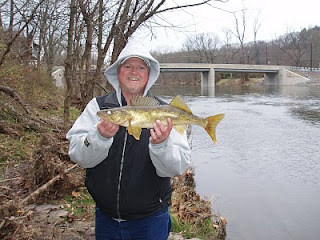 At this point it was about 8:30 AM and although my body was warm overall, my hands were completely numb and nose was running at will. I REALLY wanted to catch a fish, but was beginning to think I would sacrifice my skunkless streak for some warmth. As a back story, I managed to go all of 2009 without getting skunked and was hoping I would do the same in 2010. Unfortunately, the streak ended on a chilly day in late February on Little River Reservoir, but I haven't been skunked since.

It was 9:15 AM and we agreed that we would fish another 15-20 minutes and call it a day - as were really feeling the effects of the weather. Eventually I tied on a Yo-Zuri Twitch'n Minnow in a gold with black back pattern and worked it through the area. After about 10 minutes I hadn't had a bite so I started walking and casting closer to the bridge where we parked. Typically this area is shallow and has not produced fish, but they just put in a new bridge and it looked deeper than before. I saw what looked to be a current break caused by a submerged boulder or rock bar and threw my jerkbait near it. I worked it toward the bank and just had one of those feelings, call it fisherman's intuition, come over me. About midway in I felt a solid strike and immediately line began pulling from the reel. As I set the hook the side of the fish came out of the water and I could see that it was a true Penns Creek leviathan - a muskie. I smiled and new the battle was on. 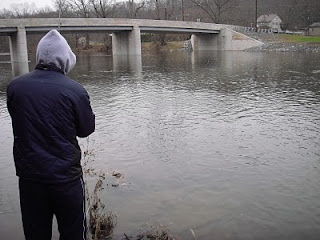 And the fight was on...and yes I was dressed like a jogger (except with 4 layers on)

My first thought was pure excitement, as I have never actually landed a muskie. I have had numerous muskies either break my line or throw the hook, as I am typically bass fishing when I hook one. I had grabbed one of my dad's set-ups on the way out the door - a 6'6" medium action rod and a size 20 reel (made for 6-8 lb test) spooled with braid. To top it off, neither of us were sure how long the braid had been on there, which made me nervous, especially in the cold weather. I was almost certain that the combination of the muskie's size, giant teeth, the small treble hooks on the bait, the light rod and reel, or the line would lead to the fish getting away. But I was determined to land him. 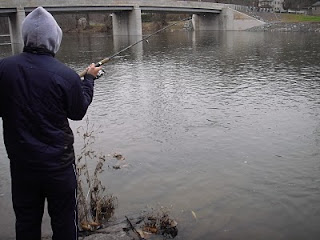 My forearm was burning! (Also notice the iced up guides)

The fish took line for a couple of minutes as I applied steady pressure. The rod was doubled over and my dad turned to me and mentioned that my fish sure was fighting hard compared to his. I realized that he hadn't yet seen the fish and so I replied that the fish on the end of my line was not a walleye or a smallmouth. He quickly put his rod down and came downstream to where I was. I told him that it was a muskie and he snapped a photo of the fight (which I am hoping to upload soon). In an attempt at a second shot, his camera battery died. I thought about giving him my camera and asking him to take video, but I was worried that I would lose the fish trying to unzip my pocket to reach the camera. I decided against it and continued fighting the fish. Every time I gained line on him he pulled it back out. Finally, he began to tire and we could see his massive white underbelly and sides. Occasionally he would thrash his head out of the water. It appeared as if the line was actually wrapped around his mouth with part of the line in-between teeth.

We debated about the best spot to land him for a minute or so. Option A) was a few feet downstream of where I was standing, but was on a muddy bank that would make things interesting for us all. Option B) was a few feet upstream on the piece of bedrock I was standing on. Although flat and not far above the water level, pulling the fish a few extra feet upstream was not what I wanted to do. Option C) was landing the fish at my feet, but the drop to the water was a bit much. We went with Option B) and my dad offered to land him. After another short run I pulled the fish to the bank. His shear mass made it hard to get him on land, as the deeper water had helped support his weight. I got him on the rock and my dad got a finger under his gill plate. Then the second fight began....

The fish slipped from his hand and in the process the line broke with the lure still in his mouth. I hadn't realized the line broke as my dad began to panic a little and grab for the fish. He tried to grip the fish behind the head (as we often do pike), but the muskie was thrashing and the combination of rogue treble hooks and teeth made it hard to grab or control him. The fish slipped through his grasp again and my dad even got a foot wet trying to corral the beast. I tried, in a last effort, to grab him as he swam away, but was barely able to touch his tail. I thought about jumping in after him, but instead I was forced to watch him slowly slip back to the depths of the creek.

Although we were both disappointed to have not gotten a photo (my dad seemed to take it harder than I did), I was happy to have at least been able to touch the tail of the monster and to have gotten him on land, albeit for a few brief moments. I can definitely see why some people spend their lives chasing these beautiful giants as there is just something special about them that words can not describe. We decided that was the "perfect" ending to the day and packed it in.

We estimated the muskie to be around 36" in length and it had an incredible girth, placing it in the 12-16 lb class. Thinking about it now still gives me chills. It is one of those special fish that I will never forget and I was really glad my dad was there with me. So all in all, we braved the elements and landed 2 fish - a beauty of a walleye and a now legendary muskie...at least to us. Tight lines!
Posted by Drew Haerer at 8:41 PM