Saturday was the last Carolina Yakfish tournament of 2010 - taking place on Jordan Lake. Jordan is a lake that has typically been good to me, so I was excited going into the day. Being the last event, it would also determine, in part, the final angler of the year standings. 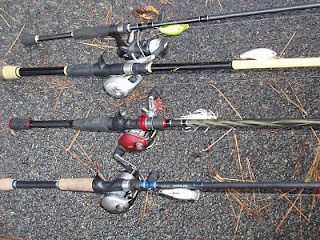 One of my favorite times of the year - fall cranking time!

I got out on Thursday morning to practice - launching around 9 AM. The water temps were between 69 and 71 degrees, which were warmer than I had expected. I decided to start fishing the wind blown bank, targeting fish eating schooling shad. This is one of my favorite times of the year, because I love to "power fish" with various crankbait patterns. On my 3rd cast of the day I landed a 14" largemouth on a Cotton Cordell Big-O crankbait in chartreuse. The fish was set-up on a small funnel area in about 2-3 feet of water. 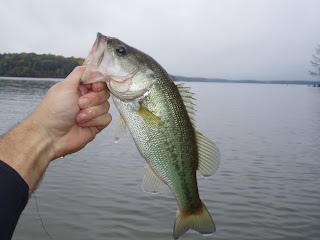 My first practice fish - caught a stones throw from the launch

I continued fishing down the bank, but went a couple hours without a bite. A couple areas I had done well in before didn't seem to hold fish, but the water was also 3-4 feet higher than usual, so I expected some change. Finally, around 11 AM I got another bite. The fish hit toward the back of a small creek arm on a drop that went from 2-8 feet of water. It hit a Lucky Craft CB-250 crankbait in a shad color. The fish measured 16" and was chunky.

About 20 minutes later I hooked another fish on a rocky, wind blow point. The fish measured 13" and hit a Lucky Craft SKT MR in Gun Metal Shad. I was feeling good that my crankbait pattern was paying off and I decided I would call it an early day and head to the office for the rest of the afternoon. I stopped at one last spot on the way back and caught a chunky 15" bass on a rocky point. He hit the same Lucky Craft SKT MR crank. I ended up at the dock around 1 PM with a 3 fish limit of 45". I was content with that, although was pretty sure it wouldn't win on tourney day. 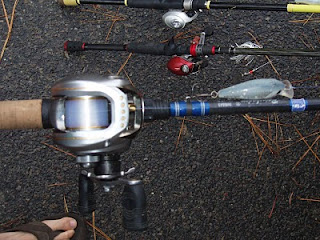 This trio (Daiwa Zillion, Carolina Custom Rods 7 footer - "Duke Edition", and Lucky Craft SKT MR) has been GOOD to me this year!

I had an important assignment due Friday, but after it was finished my mind turned back to the tournament. I didn't sleep much the night before and I hadn't slept much due to school the 3-4 nights prior. So needless to say, when I pulled up at the launch at 6 AM Saturday morning I was exhausted already. And to top it off, the sub 40 degree temperatures were not making it any easier. I loaded up the yak and got ready to launch as guys were rolling in to compete.

We went through the usual pre-launch stuff and 22 of us hit the water a little before 7:30 AM. Instead of making a long run in the dense fog, I first pulled up in a little cove where I had caught one during practice, but I couldn't get an early fish. I then started making my way down the bank knowing that my crankbait pattern would be best later in the day when the wind started blowing and the sun got up.

About midway back a small creek arm I felt a small bite on a crankbait, set the hook, and after a few seconds the fish was gone. It was probably a small bass, but I would have loved to get one on the board early. I stopped to hit another spot where I caught a practice fish and after about 20 minutes caught a 15.5" bass in 8-10 feet of water on a Lucky Craft CB-250 crankbait. Given that it was only about 9 AM, I felt good with that fish. My next 2-3 spots had bass boats in them, so I skipped them and fished some new water heading north on the lake. But, the structure there wasn't what I was hoping for, so I turned around and headed back toward the launch. 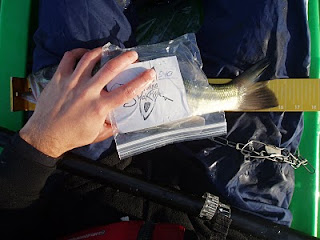 It was around this time that I noticed a little extra water in my kayak, but didn't think too much of it and kept on paddling/fishing. I stopped at a few spots that fit my patterns, but just could not get another bite. I ended up making a long paddle back toward Ebenezer and Beaver Creek. I pulled up on a bank and on the second cast had another small bass hook up and then get off within seconds. This time I dropped a few profanities...thankfully the wind covered them up. I fished some points and rip rap for the next 45 minutes with no luck.

Finally I got to an area that looked good and the wind was set-up on perfectly. After cranking it with no luck I flipped a plastic into a downed tree and felt the characteristic thump of a bite. The fish hit and ran right at the boat. I set the hook, saw the green side of the fish, and the hook came free. Another fish, this one measuring at least 14", had escaped me!

I decided to keep fishing down that bank realizing that the fish I was finding in 3-7 feet of water were now deeper. Unfortunately, I didn't get another bite on that bank. I was completely worn out from paddling, the wind, and lack of sleep. Not to mention I now had a few extra gallons of water in the bottom of my boat, which made it extremely hard to maneuver. It was nearly 2 PM and we had to be back around 3 PM. I hit one more area before heading back toward the launch. I stopped for a couple minutes and fished the area where I had started the day and caught the 14" bass in practice. I couldn't get a bite on a crank or finesse worm and my exhaustion and frustration were enough for me to hang it up a little early. Deep down I knew that I should have fished a tree in that last spot slower and with a texas rigged worm rather than a weightless worm, but I was absolutely beat.

I pulled up on the beach with one fish and a boat full of water. I emptied my gear from the hull and stood the kayak on end. The water reached from the back of the boat nearly the whole way to the seat. I am not sure of the volume, but it was A LOT (the search for the leak will take place later this week)!

At that point it was time to cross my fingers for AOY. The numbers were coming in and I knew I stood in pretty good shape. Since I knew I couldn't upgrade (AOY is the best 3 out of 5 events) I had to wait on the results of others. At nearly 3 PM, I knew I was in great shape, although I wasn't sure of the exact points needed. Then Joey Sullivan, who was in 2nd place for AOY going in, caught a pretty 17" bass right where I had stopped fishing and within sight of the launch. The fish, and 2 others, originally put him in 2nd place - giving him the AOY crown hands down. Later the 17" bass was DQed because the picture did not include his identifier, but he had a 4th fish, which allowed him to hang on to a 4th place finish. That was still enough to give him the AOY crown by 2 points as his 1st, 2nd, and 4th finishes beat my 1st, 3rd, and 3rd. A huge congrats to Joey on his day and entire season! The winner for the day was Native Guide Philip Ruckart who crushed the field with a 62" limit. He caught his fish in 18-25 feet of water on jig and pigs and plastic worms. I mentioned to him after that I was extremely envious of his patience on the water....maybe I will have to work on that next year! Again, congrats to him as well as Tommy Sullivan and Don Parks who placed 2nd and 3rd respectively. Even more importantly, the Carolina Yakfish Series raised $1701 for Heroes on the Water - surpassing our goal of $1500. A HUGE thanks to everyone who fished with us this year!

This was my last tournament of 2010 and it has been an amazing year! Late August marked the one year anniversary of solo kayak fishing for me and it is still hard to believe how much I have accomplished, all the amazing friends I have made, and how many beautiful places I have fished. First, I want to thank everyone who has been there to support me in one way or another - especially my family and friends. Second, a huge thanks to Brett Hinson and Carolina Custom Rods for the support and continued partnership. Third, my friends on the water - especially Gary Ribet, Bob Dainton, and Joey Sullivan (although there are MANY more). I also have another thank you as a result of this past year, but I am going to save that for another month or so and announce it when everything is finalized. However, it is something I am really excited about!

Bob, Joey, and I will be organizing the Carolina Yakfish Tournament Series for 2011 as well, so keep an eye out for the schedule in the next few months. If you have any ideas/additions or know of a potential sponsor or donor then please email me (see the 'Contact Me' page). We hope to see you out there! Tight lines!
Posted by Drew Haerer at 6:49 PM