On Friday, a group of friends and I headed to Jordan Lake to try and catch some catfish. The group included some old friends like Gary 'froggy waters' Ribet and his wife Pam. It also included Chris and Jeremy, two returnees to the Duke Fishing Club. However, it also included a number of new friends from Duke. Some of them had been fishing for years and others are fairly new to the sport.

We first arrived at the lake around 7:45 PM. People would continue to trickle in and out between then and about 2 AM. Armed with chicken livers, nightcrawlers, and cut bait we gave it a go. The bite was slow to begin with, but about 20-30 minutes after dark the bite began to really pick up. Mary May put the first fish on the board - a chunky channel cat, which although not a giant, would be the biggest fish we landed all night. However, we were all pretty sure it was the good luck of Jun, who had just arrived, that helped land that fish! 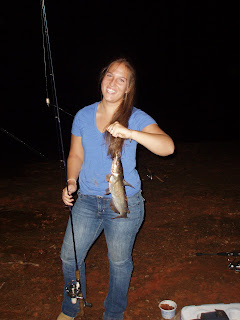 For the next 2 hours the bite was fairly regular on chicken livers and we were landing decent size channel cats every couple of minutes. Then the bite began to slow down significantly and we moved down the bank about a hundred yards toward some rip rap. We set back up there and waited patiently. Unfortunately, the bite there was hot and cold and a lot of smaller fish were stealing our bait. However, on a couple occassions 4-5 rods would hook up at once. We were still landing channel cats mainly, but also had some flatheads (mud cats) and even a white catfish thrown in.

Around 2 AM we decided it was time to call it a night (and we were out of bait). Chicken livers were far and away the most productive bait. We ended up keeping about 6-7 cats to eat. Since she caught the biggest, we all agreed it was only fitting that Mary May got to hold them for the last photo of the night. 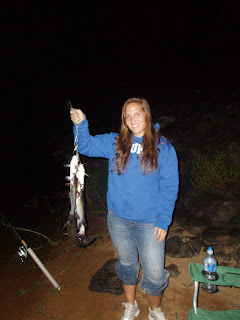 A huge thanks to Gary for helping me out and everyone else who came out to join the crew. I, personally, had a ton of fun. Until next time, tight lines!
Posted by Drew Haerer at 2:56 PM