Any visit to my parents home in central Pennsylvania is not complete without a fishing trip or two. On this particular visit, I was set on getting the yaks in the Susquehanna River. The word Susquehanna means "broad and muddy" - ranging up to a mile wide in spots. I grew up fishing this river with my father nearly every Saturday during the summer, but have only fished it 2 or 3 times over the past few years. Unfortunately, everything I had heard about the river this summer was pretty negative. River rats were settling for 1 or 2 fish days and some even getting skunked. The combination of high temperatures and low water made many believe that the fish were pushing up into feeder creeks. Others believed that the fish were just gorging on crayfish. Despite the reports, I was set on proving everyone wrong.

On Monday we decided to give it a go, despite the tough conditions. The temperature dropped over 15 degrees from Sunday to Monday including a nightime low of 50, the river was stained and slightly rising, and the wind was blowing fairly consistently. Regardless, we rounded up the yaks and my dad, my good friend Travis, and I hit the river just south of Sunbury. After taking a few minutes to get everyone situated, we were on our way.

We tied on a variety of baits including spinners, buzzbaits, jigs, grubs, and senkos. About 10 minutes into the float I tossed my senko next to a giant root wad and seconds later my drag was screaming. The fish hit and immediately pulled me toward the tree. He then ran under the boat 2-3 times and did his best to shake the hook. As he breached the surface I could see that it was a nice fish. I landed him and got a weight and photos. The fish went a hair under 4 lbs - my biggest smallie in a couple of years. Although not particularly long, he was extremely thick and fat. 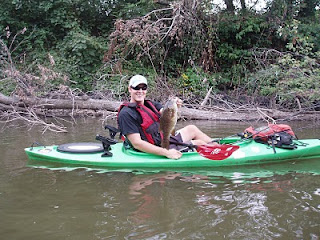 Needless to stay, I was really excited and was thinking we were headed for a great day. Unfortunately, it was not a sign of things to come. At this point, the wind was really picking up and blowing in the same direction as the current, so staying in one place long enough to cast was tough. I lost a fish on a grub and Travis had a couple of bites as well. We fished for a couple hours more before Travis hooked up with a good fish. It immediately started dragging him downstream and he was in for his first real sleigh ride in a kayak. A minute or two later he landed an 8-10 lb channel cat that had been gorging on something. 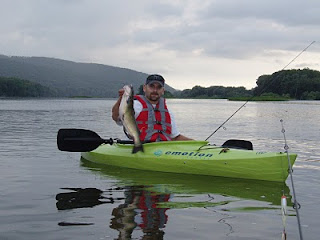 Although it wasn't a great day, it certainly could have been worse. My dad got his first taste of kayak fishing. Although he didn't get a fish, I think he enjoyed it and realized that there are some definite challenges presented when yak fishing. This was also Travis's first time in a kayak, although he often fishes from a canoe. Hopefully we get a revenge visit with the river sometime soon. Tight lines!
Posted by Drew Haerer at 12:19 PM