It had been over 10 months since I trudged the shores of Jordan Lake in search of catfish.   Catfishing is not my forte, but I love its relaxing nature and consistent bites. For me, it is always a bit of an ordeal that typically ends in sweating through my t-shirt, smelling of bug spray and chicken livers for 48 hours, having weather change in the blink of an eye and, of course, plenty of catfish action.

I loaded up the car and met my friend Wendy on the way to the lake. We typically fish flats and channel drops near rip rap or cover on the southern end of the lake. We pulled up to our original spot to find a father and son, so we headed for a point in slightly deeper water. After getting set-up and putting a couple of rods in the water, we had our first fish, a small channel cat, within a minute. We caught 4-5 small channel cats within the first 10 minutes - mainly on chicken livers.

We continued catching fish regularly for the next couple of hours and seemingly always had at least one rod tip bobbing up and down. But about an hour and a half after dark the bite nearly died. We decided to move shallower on the flat and keep trying. At this point, we had caught tons of small mud and channel cats, but didn't have any eating size cats to show for our efforts.


We reloaded our rods and threw them along the flat, which had some rip rap and grass present. This time, we rigged a couple rods with fresh cut bait, which we had not used previously. The bite immediately picked up, particularly on chicken livers and night crawlers. After landing a few small fish we finally got a decent size channel cat on a piece of cut bait. Then, 30 minutes later, we landed another good size channel...at least we wouldn't go hungry!

We fished into the early hours of the morning, conversing about a variety of topics, doing a lot of laughing, and reeling in fish with decent regularity. Eventually, Wendy ran out of time and the bite slowed, so we packed it in and headed back to Durham. 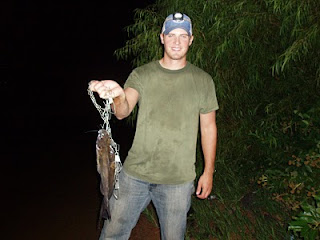 I would estimate that we caught 40-60 catfish, but couldn't get any bigger bites and only kept 2 to eat. We tried using hot dogs, night crawlers, fresh cut bait, and spam (which was tough to keep on the hook) throughout the night. My typical way to rig these baits is a 3/4 oz. to 1 oz. sinker rigged above a swivel on a carolina rig. I typically use #2 and #4, red, Gamakatsu cirlce hooks and occassionally size 4-6 Gamakatsu straight shank baitholders. On most of my rods, except a big bait rod, I use 8-12 lb test line.

It was a really fun night and great time on the water. I want to thank Wendy for making it a very enjoyable trip. I am glad you could join me on the water...we need to do it again soon! Tight lines!
Posted by Drew Haerer at 2:48 PM