Saturday was a fun, yet challenging day on the water to say the least. I think it can be summed up pretty well by a quote from Sam Elliot's character in 'The Big Lebowski'...."Sometimes you eat the bear, and sometimes, well, he eats you."

I pulled up to the launch, which granted, is in the middle of nowhere, to find a truck already parked. The straps in the back indicated I would probably have company on the water. On this small river it made me a little nervous, but I decided to give it a try anyway.  I launched around 2:30 PM in 95+ degree heat. Immediately I was re-thinking my choice of an afternoon trip.

Shortly after, I ran into two kayak anglers who had spent their morning fishing the stretch.  They had relatively poor results, so my hopes were slightly lifted.  Unfortunatley, I could tell as I fished that this small slow had been affected and the fish were skittish.  I caught a fair number of fish, but nothing big.

I kept moving up-river and catching decent size fish. Finally I hooked and landed a nice river bass on a weightless plastic. The next cast I had another big fish hit the bait, run me into cover, and snap my line. I was a little deflated, but no sooner did I tie on a new hook then I had another fish. 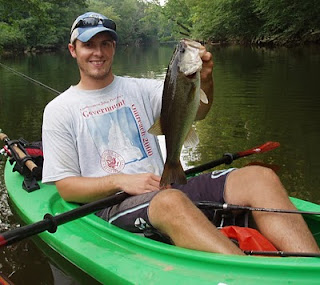 It was a day with mixed emotions and some tought luck.  But, I know many a lunker lurks in those waters.  A return date with this spot may be in the very near future! Tight lines!
Posted by Drew Haerer at 11:22 PM