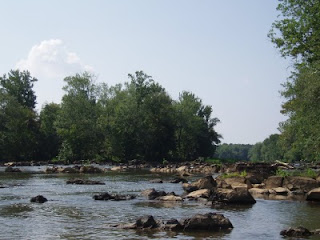 On Thursday, Bob and I decided to hit a Piedmont flow and check out a new stretch. This stretch, which was about 6 miles long, looked pretty good on the map, so we were excited. We met around 7 AM and thanks to Bob's wife, were on the water shortly after.

Within the first 5 minutes of the float, I lost about a 2 lb bass on a plastic worm and shortly after Bob landed a similar size fish. I then boated a solid bass on a spinnerbait and things were looking good. But, for the remainder of the day, the bite was streaky. I would go for long stretches getting nothing but bites from sunfish. Then I would land 3 bass in a 20 yard stretch. 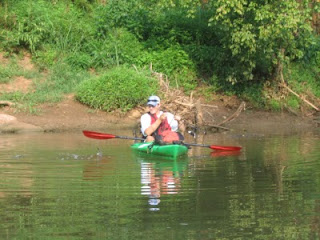 The highlight of my day came fairly early on when I landed my first pickerel in NC. It was 20" long and hit a plastic worm as I reeled it over a log. This was also the first pickerel we had caught in this river or ever heard was caught - at least among our acquaintances.

Overall, I landed 22 bass, 4 sunfish, and 1 pickerel....not a bad mixed bag. Most bass were around 1-1.5 lbs, but there were plenty in the 2-2.5 lb range and my best fish was around 3 lbs. For this particular river, it was a poor day in terms of size. Fish were caught on plastic worms, spinnerbaits, buzzbaits, and swimbaits. Tight lines! 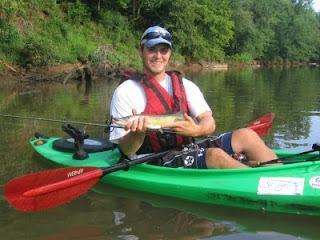