Floating the River with Paul

Last weekend my neighbor Paul and I hit the river for a Saturday morning trip. I love fishing with Paul for many reasons, but the two biggest are 1) he has a newborn and I know his free time is rare and 2) Paul and I know more random facts than anyone should ever know, so our conversations typically lead anywhere and everywhere. 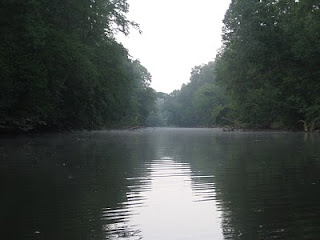 We hit the water around 6 AM and began our float. It was Paul's first time in a yak in years, so it took him a little while to adjust to the 10 foot sit-on-top. I started throwing a Lucky Craft Gunfish while Paul threw a topwater frog. I had a small fish boil on the Gunfish and Paul had another boil on his frog, but we had no real takers. I then switched to a combo of a Cotton Cordell Big-O crankbait and a Deep Creek Lures worm and Paul switched to a white spinnerbait. The first bite of the day was a big one as a nice largemouth pulled drag from Paul's spinning combo. As the fish breached the surface, we could both see that it was well over 4 lbs and possibly over 5. He fought the fish for another 10 seconds (although it seemed like minutes) before it threw the hook. This fish would somewhat epitomize our day.

I caught my first fish of the day on the crank, a 1.5 lb bass, to get the skunk out of my boat. We continued up river and hooked some fish on the worm and spinnerbait. We had boated a few, but nothing to brag about. I actually caught my first catfish of the summer on the Deep Creek worm, but even he flopped off as I pulled him from the water. We arrived at the top of our float landing only 5-6 fish and we were both a little perplexed and frustrated. While wading a shallow pool, Paul and I did manage a double as he landed as small bass and I a sunfish who ate a worm nearly as big as him.

As we turned and headed down river the bite started to pick up. I switched from a Deep Creek worm to a Gary Yamamoto worm in one of my favorite shades of green and it seemed to make a difference. I caught 7-8 bass in a short stretch, including 3 on consecutive casts at one point. However, the big bite still escaped us.

Conditions continued to change as early afternoon storms were blowing in. The bite ran hot and cold, but we got bites somewhat consistently. I was landing fish every 10-15 minutes, but they were all fairly small or coming unbuttoned. Finally, I threw my worm along the base of a tree and it got hit hard. The fish took off toward deep water and I could feel the head shake of a nice bass. Seconds later the hook popped out and my tough day continued. Paul was also getting some bites, but having trouble putting fish in the boat too.

We approached the launch knowing that we had to soon call it a day in order to avoid the dark clouds that were blowing in. It was then that I got a good bite and finally landed one of my best bass of the day. 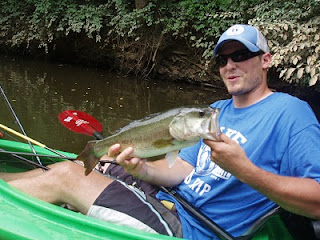 For the next 30 minutes we fished in fear of getting rocked by the storm, but the bite really picked up. We started getting bit every other third cast and were landing some 1-2 lb bass. I lost a nice fish in a mess of trees and Paul soon boated a 2.5+ lb bass. He then hooked another that was a little camera shy and flopped off before he could land him. 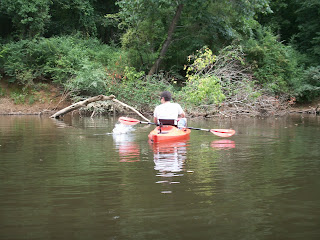 Paul hooked a couple more before we had to call it a day. We put the gear in the Escape, threw the yaks on the roof, and jumped in the car. By the time I turned the car on the rain started and within seconds it became a torrential downpour. I have to credit Paul for that as I wanted to fish another 10-15 minutes.

Paul caught fish on a spinnerbait as well as a wacky rigged plastic worm. I caught all of my fish except 1 on plastic worms and, although I love supporting local products, the Yamamoto worm outfished the Deep Creek worm (both the same style) approximately 17 to 3. While I believe the changing weather conditions had something to do with those numbers, it is hard to argue with success!

Thanks again to Paul for joining me on the water. Until next time, tight lines!
Posted by Drew Haerer at 10:34 PM