Friday morning, two good friends (Scott and Bob)and I hit a Chatham County river to chase stripers, hybrids, largemouth, spots, and anything else that happened onto our hooks. This spot had been very productive for us this summer so we had high hopes. 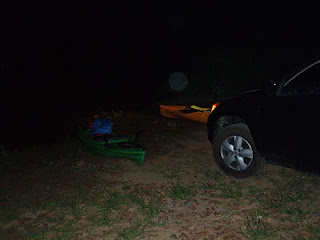 We had planned a 4 AM meet-up and 4:15 AM launch to try and get the entirety of the striper bite. However, the moon, which was a beautiful orange on the drive south, disappeared into the clouds around 3:45 AM leaving the morning nearly pitch dark. We launched on time, but the bite was slow. It proved quite difficult, throwing to the faint outlines of current breaks, boulders, and logs. I had a good blow-up on a buzzbait, but the fish never got the hook. Shortly after, I heard Scott let out a yell and he landed a chunky blue catfish on a topwater plug. We took our time until about 5:15 AM, when twilight came and we could actually begin to see where we were casting. 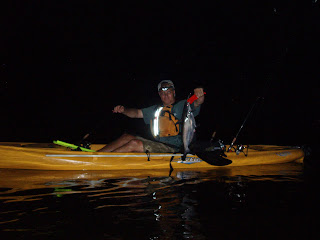 We spread out, fishing hard and switching baits as we saw fit. I landed my first fish rather quickly, a small spotted bass, and two casts later had a second spot in the boat. But the bite was a little slow. I had a nice blow-up on a Lucky Craft Sammy (which was the bait that landed the first 2 fish), but again the fish never drew hook. As the sun got higher I decided to switch to a Sebile Magic Swimmer swimbait. As I tied it on I realized that the hooks were smaller than I would have liked, but I certainly wasn't going to change them right then and there. Two casts later I hooked a solid fish in the current. I had made a long cast and the fish was pulling hard through the boulder filled channel. About midway to the boat he broke the surface and revealed himself to be a 20" (or so) striper. On the same jump, he threw the hook....I would go striperless for the day!

It turns out Scott and Bob hadn't had much better luck with a blow-up here and there, but no fish other than spots. We started working our way down river and I threw a mix of topwater and spinnerbaits. We got to a rocky area to find the bite much slower than normal. In fact, the area, which is typically littered with spotted bass, seemed nearly void. I decided to paddle down a side channel where a creek came in to explore a bit. This turned out to be one of the better moves of my day.

The channel, which contained a couple class 2 rapids, looked more like a trout stream. The most bizarre part was that even in the current, it was full of carp. However, some of the side pools looked awfully bassy. After navigating through the rapids I stowed my boat on shore and waded back up to some of the pools. Nearly every current break and eddy seemed to be full of spots and for the next 40 minutes I rarely went 2 casts without a bite. I landed 20 or more spots (the Kentucky breed) with numerous fish over 12" and one pushing 14".

At this point Scott turned around and I am not sure how the rest of his day went. Bob and I decided to explore further down river. This turned out to be more work than we had expected as the bite was slow, weather was hot, and haul back up river was brutal. After our unsuccesful exploration, which yielded only a few small fish, we headed back toward the area where we had started. 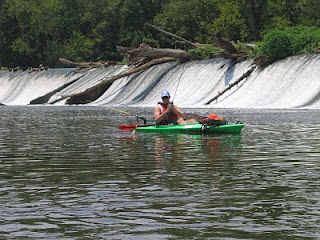 On my first cast I landed a 13" spot on a spinnerbait, which I thought was a sign that the bite would be hot. 2 casts later I had a fish blast the spinnerbait, but didn't hook up. However, the next 30-40 minutes was spent casting numerous baits without a bite. We decided to pack it in and head for the trucks as we were beat and the temperature was quickly rising toward triple digits. As we paddled for the bank I threw my spinnerbait in a fishy looking chute where I had thrown probably a dozen or more casts throughout the day. As the bait got within about 8 feet of the boat I saw a big mouth and head appear behind the lure. The bite was awesome and it felt like the rod would be jolted from my arm. Upon seeing the fish, my brain was trying to process what it was. It wasn't a striper or hyrbid, nor a largemouth or spot. It wasn't a cat.....it was a bowfin.

For those of you not familiar with bowfin, they are a unique fish. They have been around for over 150 million years, have extremely hard scales and mouths, and rows of sharp teeth. I had only landed 2 bowfin previously and only hooked 3 that I could positively identify. However, until today I didn't have a picture of one because I never had a desire to bring one in my kayak with me. 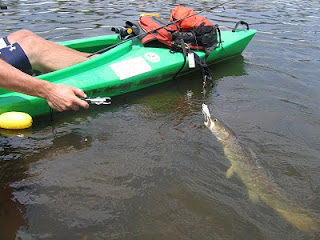 After a good fight and multiple jumps the fish came to boat side. Thankfully Bob saw the aerial display and turned back to help take pictures. He also lended me his Boga grip (I need to get one of those!) to clamp on the fish while I removed the hook with pliers. My spinnerbait was stucky squarely in his upper lip, but popped out of the bone hard upper jaw like it was nothing. Upon removal from the water, we noticed the fish had a split lower jaw and looked like it had been in some battles. The fish measured around 25" and 5 lbs. This bowfin was my 3rd from this river and 3rd largest, and it was big enough to qualify for a North Carolina fishing citation. It was a great way to end a day that had its ups and downs. In hindsight, we have been really spoiled by this river this summer because when a 30 bass day topped off with a citian bowfin and lost striper is considered slow, you know you have it good! 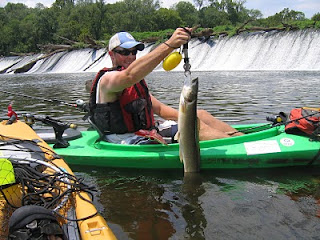 Fish were caught on a Lucky Craft Sammy topwater, Storm Chug Bug, River2Sea Buzzbait, J&M Spinnerbait, and Sebile Magic Swimmer with the J&M spinnerbait being the most productive by far. And as usual, the scenery was awesome, having carp, gar, and catfish cruising under the boat, multiple birds roaming the banks/skies, and watching panfish sip bugs off the surface all day long. Thanks again to Scott and Bob for joining me. Tight lines!
Posted by Drew Haerer at 12:09 AM