On Saturday myself and the rest of the Carolina Yakfish competitors headed to Lake Mackintosh near Burlington to tangle with some warm weather bass. This was one of the only tournaments I have ever not pre-fished, but I had spent a couple days on the lake before - one of which included a fourth place finish in the Get:Outdoors tournament in early April. Although I knew the fish would be in different areas, I had a few places in mind where I thought I could find some bites.

We launched right around 7 AM and headed different ways in search of our 4 bass limits. I bypassed an area where I had a lot of luck in April in order to get a little more water to myself at the far end of the lake. I stopped mid-way and fished in a little cove where I saw some shad activity. However, there was no feeding activity and I kept paddling. I pulled up on a rocky bank with a steep drop into 10-20 feet of water. I pulled out a crankbait and a jig and went to work. I fished down the bank with no luck. I switched to a shallower crank and fished back down the rock face. About 8:00 AM I hooked into my first bass on a Lucky Craft Skeet Reese SKT MR crank in gun metal shad. The fish went 14 1/4" and was a solid start. 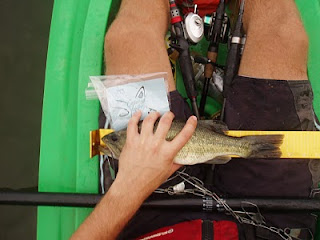 I continued fishing down the bank and came up on a spot with a long point and a deep drop. It also had a big bush hanging over the water. It was one of those spots where you know you are going to get bit. Sure enough, the fish hit a Case Plastics Jacks Worm on the fall. He ran right at the boat, but I caught up to him in time to land him and upgrade to 2 fish for 30 inches even. 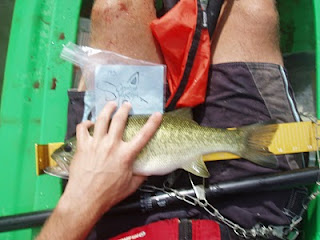 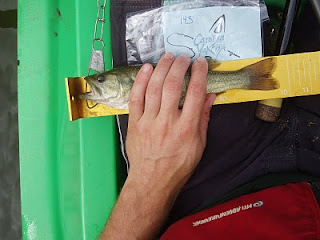 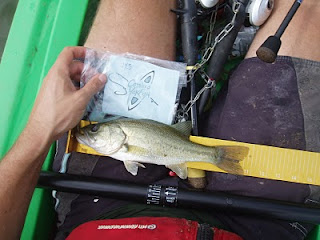 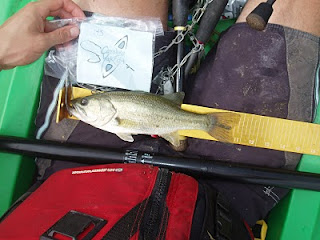 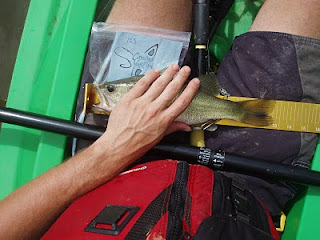 That put me at 53.5" a number which I knew would contend, but I wasn't comfortable with. I headed back out and started cranking a long point. I hooked up almost immediately on another small bass - 10.5" would not help me. After a few more casts with no takers I decided to head back toward the launch and hit the deep drops near the bridge where the wind was really funneling the baitfish. It was also in the low 90's at this point, so I thought I could find some fish deep.

I set up cranking along a rip-rap wall of the bridge/road. I tied on shallow, medium, and deep diving cranks as well as a carolina rigged worm and went to work. About 15 minutes in I got my first bite on a Spro Little John DD crankbait in about 18 feet of water. It was another 10 3/4" fish that was one of the darkest largemouths I have ever caught. 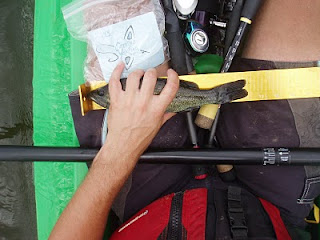 2 casts later I hooked another 10 3/4" fish on the same crank on the same ledge. I was hoping that would ignite a school of fish, but that was my last fish of the day. I was stuck on 53.5" and just had to cross my fingers. As we gathered at the launch I heard rumors of giants and skunks. After it all got sorted out (official results here) the winning total was a very impressive 72.25" by local guide and Native pro-staffer Philip Ruckert. 2nd place was originally awarded to Scott Inge who got some nice bites trolling to end with 57.5". However, Scott was deducted length due to violation of photograph criteria and ended up in 3rd place with 56". Therefore, Joey Sullivan was bumped to 2nd with a 57" day. That put me in 4th place for the day. The big fish was caught by Philip at 20.5", but he did not enter the big fish pot, so it went to Scott for his 19" largemouth.

It was a really fun and challenging day in the heat and wind. At the end of every tournament I like to reflect back about what I would have done differently. In this case, I should have spent more time fishing the long points in Mackintosh. A carolina rigged plastic would have probably been the best bet, but man are they boring to fish. I should have thrown medium and deep cranks over some of those spots too. I also wish I would have decided to skip the topwater "bite" in the morning and fished a jig and spinnerbait a little harder early.

Until next time, tight lines!
Posted by Drew Haerer at 8:35 PM