On Sunday, I decided that to do some fishing.  I was hoping to catch another striper from my yak.  The best bet would be to float a stretch of river south of Durham. With temperatures reaching 102 over the course of the day, I decided to head out and fish the late afternoon to early evening bite.

I launched around 4:30 PM and was on my way in the sauna like conditions.  I was regularly catching spots with some catfish thrown in as well. The first decent fish of the day was about a 4-5 lb channel cat. A few minutes later, I got a good bite in the same general area. I expected it to be a cat, but to my suprise it was a spot...and a nice one at that. The fish measured just over 15 1/4" - good enough for a North Carolina fishing citation. This would be my second trip in a row catching a citation size fish. 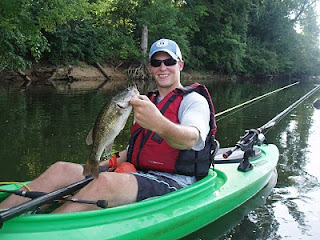 I continued catching decent fish and I lost another that felt good, but which I could not identify.
As the day dwindled we headed back up to a rapid area in hopes of landing a striper or hyrbid, but it wasn't to be as I didn't land any additional fish.  I left a little early since this particular area has a repuration for unruly characters and headed to get some Cook Out...the perfect ending to a great multi-species day on the water.
Posted by Drew Haerer at 4:15 PM